This report is on the ES, but we can't stop thinking about cattle futures (limit down to limit up)

China is playing Trump's game...start the discussion with a bazooka before eventually pulling out the bb gun to negotiate.

US equity and commodity markets were reeling last night on news of new Chinese tariffs. Not surprisingly, the markets overreacted. China's tariff threats don't go into effect immediately, and there is plenty of time for negotiations to take place. Further, it is important to remember that China imports much more to the US than the US does to China. Thus, an immediate fifty handle collapse in the ES on the news probably wasn't justified. As the day wore on, traders began to realize this and put their money where their mouths were by buying into the dip.

We saw similar action in the commodity markets, namely soybeans and the meats. We had previously recommended bullish trades in corn, soybean meal, cattle and hogs that caused some stress during today's session but appear to be on the right track. In any case, there is no logical reason to see a market such as live cattle go from being nearly limit down to limit up within the span of hours.

There is no room for complacency, nor panic, in these markets. The goal should be to stay hedged and grounded.

WE HAVE THE SAME TAKE AS WE HAD IN THE PREVIOUS NEWSLETTER: Treasuries had every reason to short-squeeze, but failed to do so.

The bond and note markets have yet to fully price in the new-found volatility in stocks. In our view, it is hard to fathom the lack of buying interest in Treasuries at a time in which there is severe stock market liquidation. As mentioned above, we believe this is because the proceeds of stock liquidation is going toward tax obligations and probably even mortgage pay-downs, rather than Treasuries.

Perhaps the bond market has already experienced most of this rally. If the selling dries up in the ES as we suspect, the buying in the ZB and ZN will also.

Treasuries are probably running out of steam. We are leaning slightly lower to sideways. 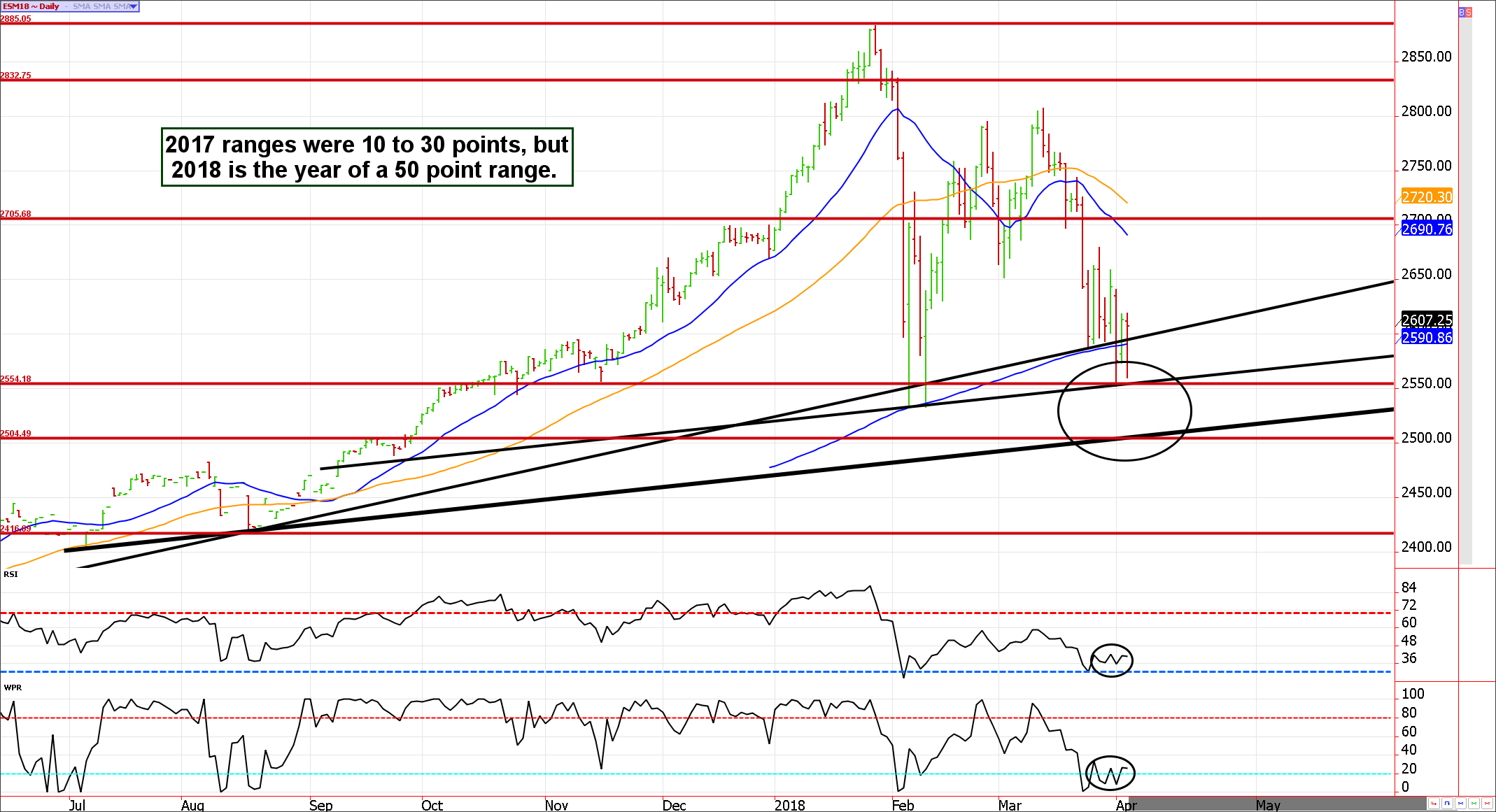 Thus far, 2550/2560 has held like a charm...but eventually the well will go dry if trade continues to test it.

Significant technical levels, such as trendline support near 2550/2560 which we have been focusing on for weeks, tend to lose credibility as time goes on. They often successfully turn the market's momentum on the first test and usually on the second, but the more the market visits the level the less reliable it becomes. In other words, three times is not always the charm. We happen to believe the lows are behind us, leaving the path of least resistance higher. Yet, if we are wrong and the E-mini S&P tests 2550ish again, we have a feeling the outcome won't be as favorable to the bulls. In fact, the third trip down would likely trigger stop running that could bring the market into the 2500 area. Let's hope that doesn't happen (unless of course, you are short).

In the meantime, the ES is poised for a "rip-your-face-off" rally; I wouldn't want to be in its way. If you made money on the downside be sure to lock-in/protect profits. 2700 is in play by the end of the week!

We are looking for a run toward 2700 by early next week.

February 21 - Sell long June ED 98 put to lock in a profit of anywhere from $550 to $600. This leaves our long futures contract underwater and "naked".

March 15 - Exit covered put in May soybean meal to lock in a gain of about $850 prior to transaction costs.

March 20 - Go long June soybean meal futures near 363 and sell a June 360 call against it. Purchase a May 340 put for catastrophic insurance.

March 20 - Buy back May ZN 121 call to lock in the profit (roughly $250 per lot before transaction costs) and sell the June 121 call for about 30 ticks to freshen up the hedge going into the Fed meeting (this leaves the position with a long June 10-year note futures contract and 2 short 121 calls).

April 2 - Sell long April cattle 113 put at a moderate profit. Use the proceeds to purchase a May 97 put as insurance against our short June 102 put.