We have an E-mini futures breakout on our hands!

Late Monday afternoon I was watching a business news station. The panel was discussing the implications of a North Korea missile being fired (they were still trying to confirm the rumor that it had occurred). There was talk of a limit down opening to the E-mini S&P (the news broke during the daily afternoon pause of trading). They were right about sharp selling on the open but the bearish tone was quickly forgotten by tax reform talk. Even a 500-year flood couldn't deter the fiscal policy bulls. By Thursday's close all of this week's bearish headlines had been forgotten. 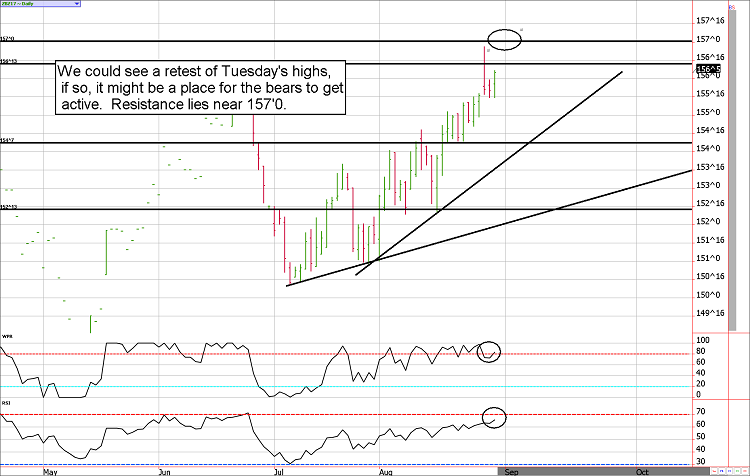 Treasuries are moving higher WITH stocks. This doesn't feel right.

Something doesn't feel right in the Treasury market. Economic news has been positive, stocks have been roaring, bonds and notes are lofty in respect to technical analysis, and the Fed is in the midst of a rate hike campaign. Aside from bullish seasonals, it is hard to come up with a good reason to be bullish the longer-end of the Treasury curve (5-year notes and above).

Also, you've likely been hearing about the flattening yield curve. Yields on longer dated maturities have dropped this year while the yields on shorter maturities have gone up.

Theory suggests that a flat yield curve is suggesting a sluggish economy going forward because a flattened curve hinders banks profits and their willingness to lend. Also, it is a sign the markets are expecting little growth. After all, if they were expecting robust growth they would expect more premium for holding longer-dated maturities.

There are two sides to the story. Many believe this time is different because the lower rates are the result of manipulative central bank policy, rather than natural market rates. Accordingly, the short end of the curve has slightly normalized while the long end simply hasn't (yet).

In any case, there are some odd things brewing in Treasuries and we have a feeling the 10-year note and 30-year bond are getting toppy. To normalize the curve, either the short-end needs to see lower yields or the long-end needs higher rates. We are leaning toward the latter.

**Bond Futures Market Consensus:** We are looking to get bearish on a rally. Support and resistance below are based on the December contract. 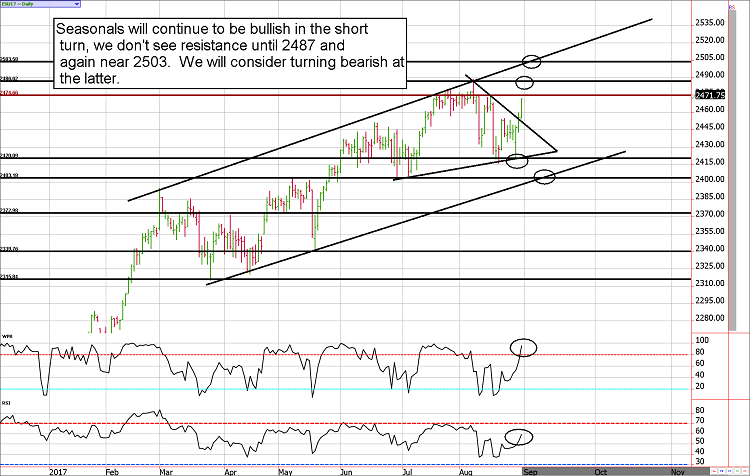 The E-mini S&P 500 futures contract is making up for lost time.

In our view, it will be difficult to curtail the momentum in the short run. Unless, of course, the payroll report is a nightmare. In the meantime, the charts are pointing toward 2486 and potentially even 2503.

If the payroll report combined with light volume manages to force prices toward 2500, it might be a good place for the bears to consider taking action.

The ES has clearly broken above 2460, we suspect the short squeeze and price chasing will put prices into the 2503ish price range.

July 19 - Sell the December e-mini S&P futures contract near 2462 and sell a 2460 put against it to provide a healthy upside hedge.

August 1 - Buy back September Euro 114.5 put to lock in a small profit, then sell double the quantity of the 116 puts to give our short calls a better hedge.

August 2 - Go long December lean hog future and sell at 59 call against it. The result is a risk buffer down to 56 cents, a profit potential of about $1,400 before transaction costs (unlimited risk below 56).

August 3 - Buy back the October ES 2460 put near 40.00 to lock in a moderate gain and sell the November ES 2460 puts near 50.00 to bring in more premium and create a better hedge ahead of the payroll report.

August 3 - Buy back existing Euro strangle and sell fresh September 121 calls and 116.5 puts for a small credit. This should give the market room to move on the payroll report.

August 21 - Exit covered put in the ES to lock in a profit of over $1,000 per contract before transaction costs.

August 30 - Sell November euro 116 put against the 123 call to get back into strangles.