We've noticed that (assuming today closes in negative territory), 10 of the last 14 e-mini S&P 500 sessions have closed in negative territory, yet the index hasn't budged in value. In fact, it is a few handles from where it started the "red" streak. Normally, if the market had such a high rate of negative closes it would be a disaster for the value of the major indices. Is this sideways action the new bear market?

Market participants are high on the benefits of an easy money policy, but where will the next fix come from? Earnings are good but the market is "richly" priced at current levels. It hasn't paid to be a bear, but the risk of being "long and wrong" is growing rapidly. 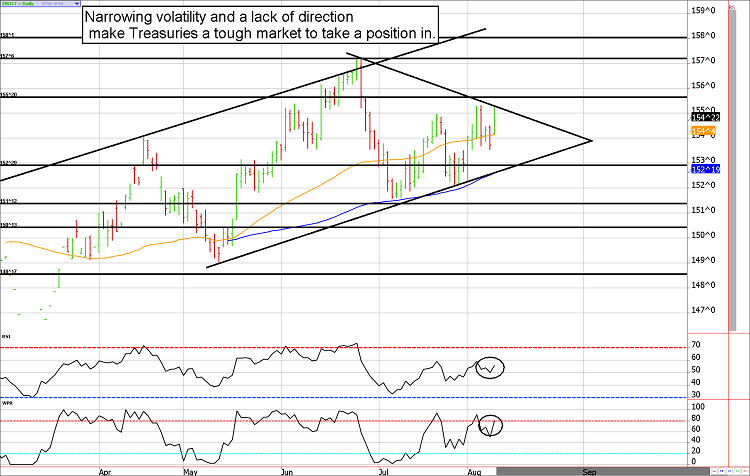 Treasuries are seeing decreasing volatility and a lack of direction. It can't last.

Bonds and notes enjoyed a nice bid in the overnight trade that carried into the day session on increased tensions between the US and North Korea. However, overall the market has been making higher lows and only slightly higher highs. The result is a large wedge pattern forming on the chart.

Breakouts from these types of formations can be explosive and are generally to the upside. If the ZB breaks above 155'11, the market could easily see a run to 158'0. However, if resistance near 155'11 fails a retreat to 153'0 would likely occur. Perhaps such a pullback would be a place for the bulls to consider getting involved.

**Bond Futures Market Consensus:** The Treasury market has become quiet, but it won't stay that way. Seasonals are bullish, so large pullbacks probably should be "bought". 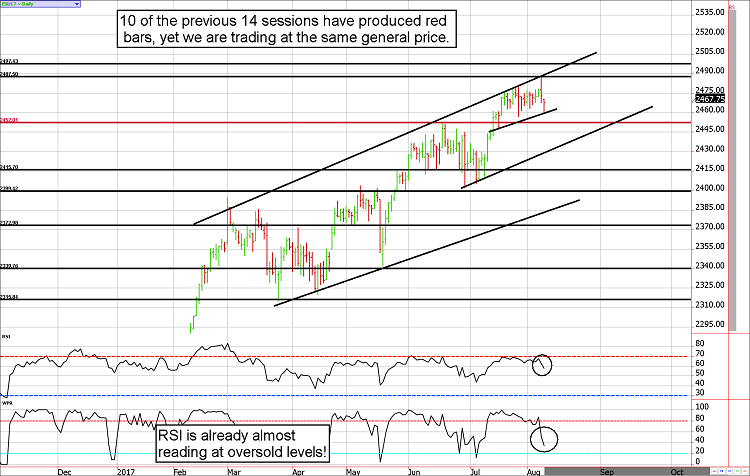 The ES ran buy stops on Tuesday, then sell stops on Wednesday...now what?

The historically quiet US stock market has been largely unphased by geopolitical chatter. It is easy for the bulls to get excited about yesterday's rally and the bears to salivate over the subsequent collapse in prices, but in the end, neither can claim a victory. In essence, it was much ado about nothing.

Until the e-mini S&P breaks out of its trading range, there isn't much to say. From a strictly charting perspective, yesterday's test of the trendline resistance near 2487 held and gives the bears a slight edge but that edge will disappear if they can't break the market below 2455 by Friday. If the bears fail to do so, the e-mini S&P would likely drift higher to the 2497 area.

Even an uptick in volatility is a non-event in this market. The bears have a slight edge going into tomorrow but they'll need to convert soon to avoid another new high by week's end.

June 27 - Establish a covered call in October soymeal (purchase a futures contract near 298 and sell a 300 call.

July 7 - Exit covered call in soymeal to lock in a quick profit. Depending on fills it could have been anywhere from $800 to $980 before transaction costs.

July 19 - Sell the December e-mini S&P futures contract near 2462 and sell a 2460 put against it to provide a healthy upside hedge.

August 1 - Buy back September Euro 114.5 put to lock in a small profit, then sell double the quantity of the 116 puts to give our short calls a better hedge.

August 2 - Go long December lean hog future and sell at 59 call against it. The result is a risk buffer down to 56 cents, a profit potential of about $1,400 before transaction costs (unlimited risk below 56).

August 3 - Buy back the October ES 2460 put near 40.00 to lock in a moderate gain and sell the November ES 2460 puts near 50.00 to bring in more premium and create a better hedge ahead of the payroll report.

August 3 - Buy back existing Euro strangle and sell fresh September 121 calls and 116.5 puts for a small credit. This should give the market room to move on the payroll report.