The ES future comes back from the dead...again. Still looking for new highs.

So much for holiday volume in the futures markets

We were expecting the typically slow holiday trading volume in financial futures markets that generally accompanies slow trading weeks. Yet, as this newsletter was being written the e-mini S&P had already traded roughly 1.5 million futures contracts with over an hour to go in the session. Similarly, the slow grind higher that often comes with holiday weeks proved to be a failed theory. On Tuesday, S&P reached the lowest level for the index since March 27th, likely with the help from a tweet from President Trump stating "North Korea is looking for trouble. If China decides to help, that would be great. If not, we will solve the problem without them! U.S.A." It is easy to see how this could put a lofty market on edge.

As has been the case lately, we doubt any of the economic data slated to be released this week will have a significant impact on the market. Pay attention to Washington DC headlines for clues. In our best guess, as long as infrastructure and tax cuts continue to be in the discussion, the S&P will move higher overall with a target of roughly 2400 in the S&P.

We weren't expecting this in the Treasury market, but thus far it is simply a retest of the highs.

The RSI (Relative Strength Index) on the 30-year bond futures contract is near 65. This has marked the high of the move on several occasions. However, as we know markets can sometimes surpass expectations, so we recognize that there could be room for the RSI to see a reading of 70 before all is said and done. While there isn't a predictable relationship between RSI and the ZB, we estimate it would be equivalent to about 2 handles (2 full points).

In any case, it seems like the headwinds should start to come into play. Yields are no longer attractive and the stock market tends to move higher in April. It's hard to justify being long bonds and notes at these prices (unless things in Washington completely unravel).

**Bond Futures Market Consensus:** If the ES retests 2400 as expected, the Treasury market should soften. 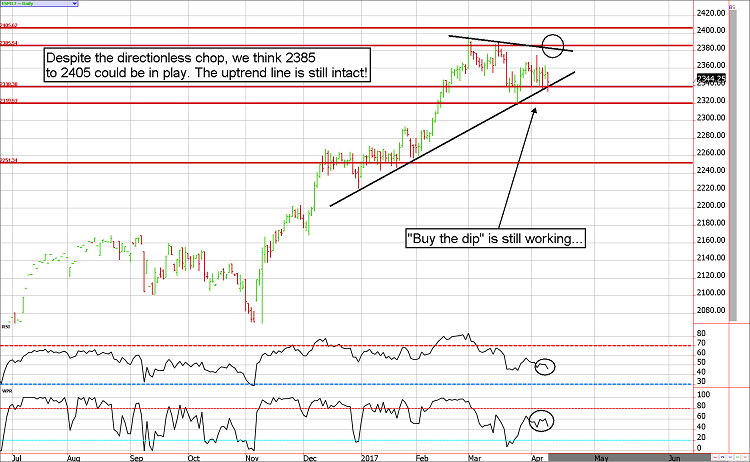 Different day, but same outcome in the e-mini S&P futures.

Early morning losses in the S&P are being attributed to geopolitical concerns...the same concerns that were shrugged off last week. The late session recovery is being "blamed" on statements by President Trump suggesting Dodd-Frank reform.

In our view, regardless of the news cycle we probably would have seen the same price action. The ES is trading in a range in which the mid-to-low 2360s have been consistently sold into and the mid(ish) 2330s have been bought.

Buying early morning dips has been a goldmine for anybody willing to take on risk in the opposite direction of the intraday trend. However, the same can be said of those willing to sell into rallies. Until this changes, there isn't any other way to play it and overanalyzing the price action is counter-productive.

Supportive seasonals and technical momentum should lead the ES futures contract to 2405.

March 29 - Exit June hog covered put trade to lock in $750 to $800 before transaction costs per contract.

April 5 - Buy back the June Live Cattle 120 calls near 42.5 to lock in a gain of about $250 per contract before transaction costs.