Finally, we are seeing the equity market correct. Traders have been waiting months for this, but I doubt it was everything they had hoped for. Although it is a relatively decent one-day sell-off, today's action was meaningless in comparison to the post-election night rally. Further, selling was orderly and without panic. The good news is, the market is looking healthier. Corrective trade is "normal" and should be expected. As crazy as it sounds, the market needs to be bearish before traders can get comfortably bullish and buying picks up.

Today's shake-up is being blamed on yesterday's Congressional hearings and today's uncertainty regarding Thursday's health care vote in the House. The Republicans claim they have the 216 votes necessary to pass the bill, but some last minute amendments are raising concerns.

As we've been stating in this newsletter, the markets had priced in political perfection but governments are designed for flawed operations (checks and balances). The financial markets could get rocky as the new administration attempts to administer change. 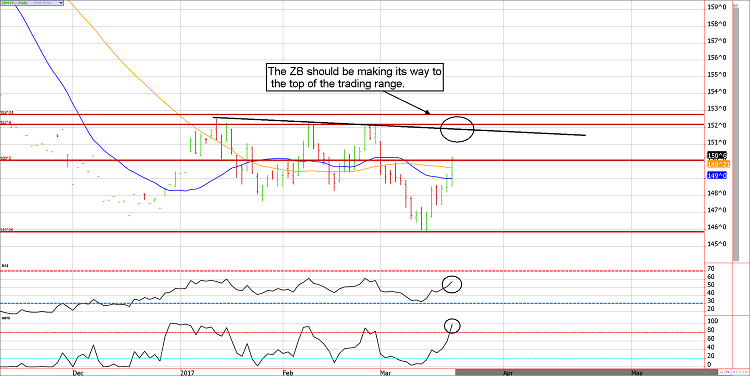 The bulls are in control of Treasuries

The massive short position held by speculators in the 10-year note has been slowly unwinding. Although the bears probably think this rally is painfully sharp, it could be far worse.

In fact, given the historical size of the short position, this rally is a little on the disappointing side. Unfortunately, it was also difficult to get positioned on the upside in Treasuries because the bottom occurred in the midst of significant event risk (non-farm payrolls and the FOMC meeting). Nevertheless, we believe the trend will continue for now. The ZB and the ZN should be headed for the upper end of the trading range, respectively 152'0 and 125'15.

**Bond Futures Market Consensus:** The trend should continue, at least until running into resistance near 152'0 in the ZB and 125'15 in the ZN. 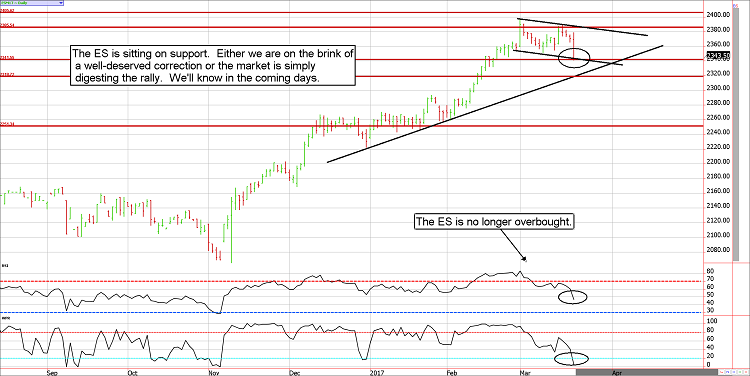 Today felt like the end of the world for ES bulls, but it wasn't

The general public has become spoiled by the lack of volatility and the never-ending stock market rally. Today's mere 1% decline seemed like a game-changer to many but it simply wasn't a big deal. The S&P is only four days out and 40 S&P points from it's last print near an all-time high.

If you are a bull, don't panic. If you are a bear, don't get overly excited. Today's trade doesn't mean much in the big picture. However, the e-mini S&P is sitting on support near 2340ish. If this level breaks, the bears might finally get what they've been looking for. If not, don't be surprised if the market bounces right back to resume the uptrend. In short, the market is at a significant crossroads.

On a side note, a client pointed out an interesting stat: In 21 of the last 22 occasions the S&P has been up through March 15th of the current year, it has been up at the end of the year. In most cases, the gains far exceeded those posted by the March 15th measurement point. The only exception was 1987.

2340ish support will be a deciding factor on whether the rally continues, or we go deeper into correction territory.

March 1 - Roll the April ES 2375 calls into double the quantity of May 2450 calls, and purchase a March 2450 call for insurance. This should be close to even money.

March 9 - Exit April 2430 calls to lock in gain (which was recouping losses from the original venture) and reduce risk ahead of payrolls.

March 14 - Buy back half of the May 2450 calls to lock in a gain (which recoups previous losses) and lessen the risk ahead of the FOMC.

March 21 - Buy back the last of the short May 2450 ES calls to lock in a gain. Most clients came out near a wash or with a small loss after everything was said and done.