It feels like "everybody" is long stock index futures and short bond futures, but can "everybody" be right?

As of last Tuesday, both large and small speculators were holding roughly the largest net short position we've seen in the 10-year note in several years (or maybe ever). Since then, Treasuries have dribbled lower which suggests they are even more short now going into the employment report.

We can't think of a time in which the masses were ultimately right about a market direction (at least in the long run). Usually, markets do the opposite of what most believe they are going to do. We all know that trading isn't as easy as following the herd. We have to wonder whether this herd is heading to slaughter. 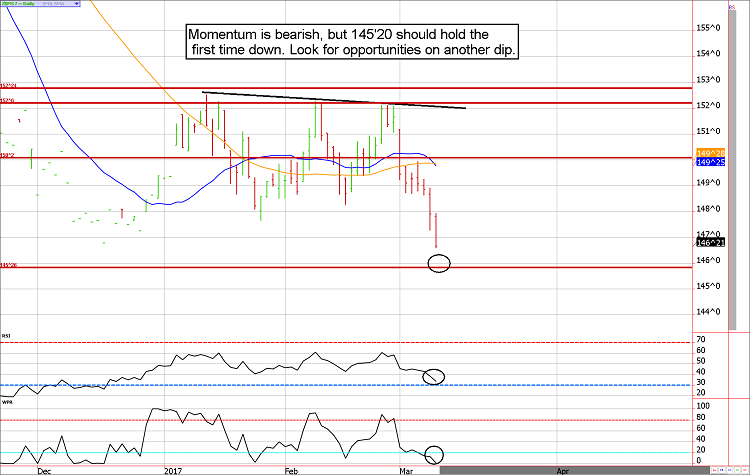 Either speculators are due for a large pay day, or they are in for a rude awakening.

We think the latter is more likely (see comments in above section). Although estimates of tomorrow's payroll report are calling for an increase of 185,000 jobs the whisper numbers are coming in at 300,000 to 350,000. It feels like Treasury traders are pricing in this type of upside surprise, but they had better be careful what they wish for. At some point, the market is going to run out of sellers and a bearish report could reveal this. Our guess is that could occur as the 30-year bond reaches the 145'200ish level and about 122'0 in the 10-year note.

**Bond Futures Market Consensus:** We'll probably see another spike lower but we will likely start to favor the upside around 145'20 in the ZB and 122'0 in the ZN. 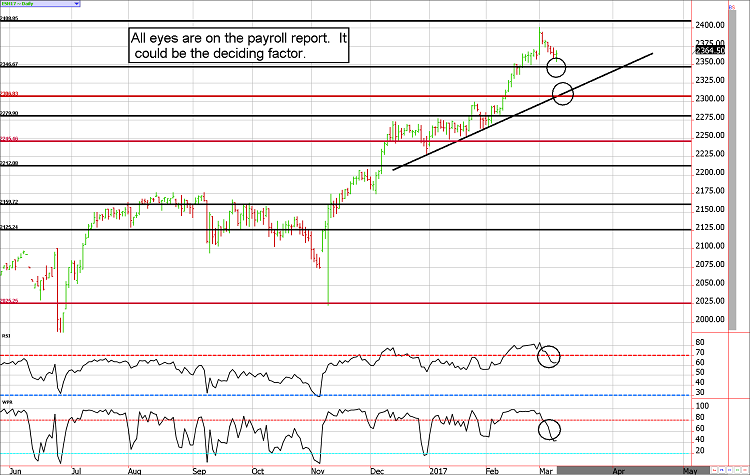 It's all about jobs for ES futures

If the whisper numbers of 300,000 or higher jobs become a reality, we suspect the stock market will get a temporary boost. However, as reality sets in that "hot" jobs numbers equate to more aggressive Fed rate hikes, we think some of the "fluff" might be taken out of the market. In other words, any large rally on the payroll report might be an opportunity for the bears.

If you are a bear, you should be aware that a retest of the 2400 area is a possibility, but the upside is probably limited to 2400/2410ish for now.

If you are following our short call option trade, we've peeled off some of the risk by buying back the April 2430 call while the market was quiet. We are still holding short May 2450 calls.

Trade feels different. It "feels" heavy...and PEs are historically high. A "normal" market would correct into the 2345 area and maybe as low as 2300ish.