We are seeing history being made here folks...

One of the fundamental concepts of market characteristics is they generally don't go straight up or straight down, yet that is exactly what we are seeing in the e-mini S&P futures. We are seeing the stock indices achieving record-breaking streaks in regard to new highs and muted volatility levels. For example, yesterday the Dow posted the 10th positive consecutive close for the first time in four years and there have been only four occasions in history in which we've seen more than 10 positive closes in a row. The Dow also closed at a new high for the 10th consecutive day for the first time since January of 1987. Similarly, the annualized volatility thus far in 2017 is 5.9%, the tamest start to a year since 1966. Just as concerning, the S&P has gone 92 days without a 1% decline, this is the longest streak since 2006 and the S&P hasn't had a 1% intraday move since December 15th, this is the longest such streak in history!

The point is, the one directional trade and lack of volatility we are seeing in the ES is rare. And it is also dangerous. You might have noted a few of the years referenced above being on, or just before, significant market declines. We happen to believe this bull has quite a bit of room to run in the long-run, so we aren't looking for an 1987-style crash but it is worth noting that "never-ending" rallies can be unstable once they finally correct. Caution is warranted. 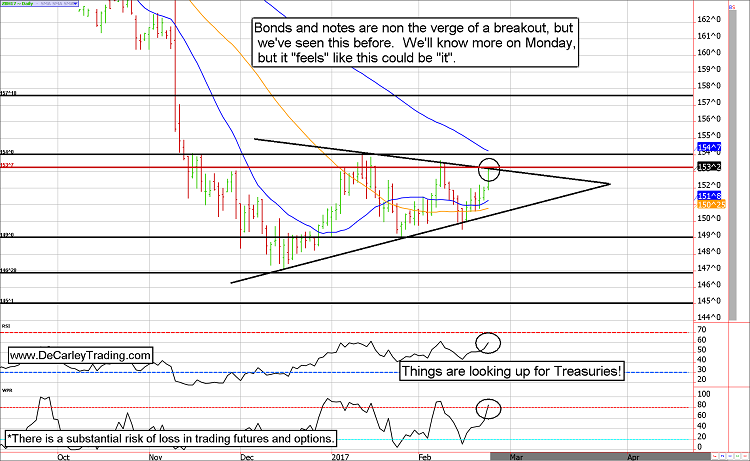 **You should be trading the June futures going forward!

As the COT report issued by the CFTC has been telling us all along, traders have been largely positioned on the short side of bonds and notes. Accordingly, today's option expiration and Tuesday's first notice day which is forcing traders to exit and defend holdings is exposing the overcrowded short trade.

For instance, we suspect there were a lot of traders with short 30-year bond call options but inclining Treasury prices this week likely forced them into buying futures contracts to hedge their positions. Naturally, this puts upward pressure on bond prices.

Similarly, with the March futures contract going into delivery soon. Futures traders are faced with the decision to either exit their holdings or roll them into the next contract month, in any case, the process will involve buying back the March bond and note futures for most traders (because the majority of traders are net short according to the COT report). As prices crept against their positions overnight, the motivation to buy became much more desperate and this put upward momentum on pricing.

Where does that leave us? According to the chart, we are on the brink of a breakout with a substantial number of nervous shorts. I wouldn't want to be a bear. 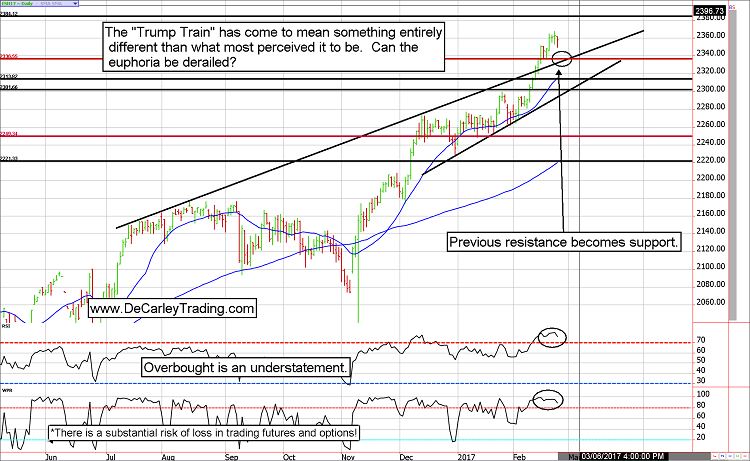 Margin calls, short squeezing, and sidelined cash scrambling to get in on the action are forcing stocks higher

As noted above, we are witnessing the most peaceful market in history. At least that is what the stats say. For anybody short the e-mini, or sitting on cash in their investment accounts, this rally has been anything but peaceful. Nevertheless, it is real and so are the consequences for those involved. Somebody pinch me!

It's a global short squeeze. Where it ends, nobody knows.

January 31 - Buy back April live cattle 127 call to lock in a quick profit of anywhere from $200 to $250 per contract before transaction costs.