The Fed is as hawkish as they've been in years...

A hotter than expected inflation reading and more confirmation from the Fed that they will be seeking at least three rate hikes this year set a negative tone for Treasuries. However, the same news was seen by stock trader as a sign of economic growth and prosperity. Accordingly, the seemingly never-ending stock market rally logged another session of buying. What can we say? This is a bull market...and nothing can derail it. In recent weeks we've seen chaos in Washington, riots in the streets of our cities, a North Korean missile headed for our shores, but we've yet to see investors interested in taking profits in the equity markets.

If you ask me, the bulls are starting to get greedy (that said, we've obviously been wrong about the strength of this rally). According to our friends at Consensus, their bullish sentiment index has reached 76%. Generally speaking, this signifies an extreme that often results in a reversal. Likewise, The AAII Index suggests only 25% of those polled were bearish the market. The bus could be getting full...and we all know that that means. 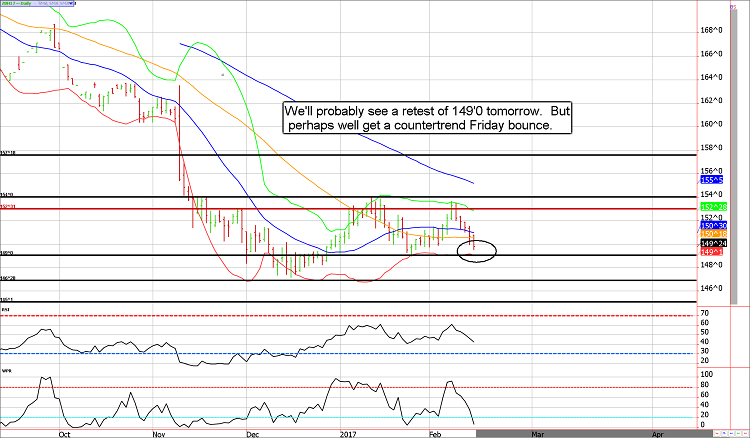 The Fed says three hikes, but the market says two (or less)

The market isn't falling for the Fed's lies this year. Last year around this time they were talking big, but only increased rates once by the end of the year. Fed Fund futures traders haven't forgotten this. They are only pricing in a 27% probability of three hikes by the December meeting, and a 32% chance of two rate hikes.

Ironically, as we've been saying...10-year note trades _have_ forgotten. They've also forgotten what has happened each time they have found themselves overly short this market (a rally). That said, the momentum is obviously in favor of the bears so we'll probably see a full retest of the recent lows. However, we expect these levels to hold for now. Particularly, if the stock market rally pauses.

**Bond Futures Market Consensus:** We suspect the 149'0 and 123'20ish areas will hold in bonds and notes, respectively. But it is going to be a bumpy ride. 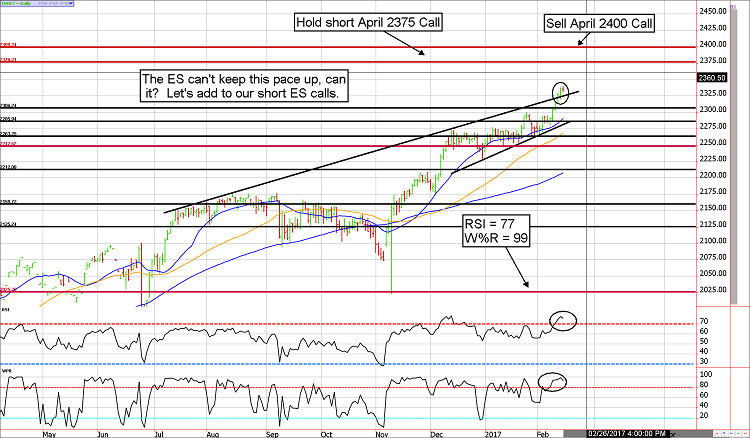 All the President has to say is "tax cut" and the S&P futures contract rallies.

There isn't much to say about the S&P rally at this point. Animal spirits are getting in the way of logical thinking, but that doesn't always matter in the short-run. And even in the long-run it only "might" matter. I'm not going to say I haven't seen anything like this because I have, and I've seen even "crazier" (yes, this is crazy even if we don't want to admit it because our investment retirement accounts look great).

I saw it in 2011 when gold hit $1,900 and silver reached $50 per ounce. I saw it in 2008 as wheat futures reached $13.00 per bushel, in 2011 when cotton traded over $2.00, and in 2007 when crude oil approached $150. There are other examples but you've probably caught on. This is what markets do, they push prices to the brink before they come crashing down. I'm not saying that we are on the verge of a repeat of 2008 in the stock market; in fact, I remain overall optimistic. However, markets cannot go up forever. Usually, they perform the worst when they look the best.

We haven't seen the S&P this overbought since 2013 (based on the weekly RSI).

We added to our short ES calls today, we are currently holding short April ES 2375 and 2400 calls. (*There is unlimited risk in selling options).

All of the rules are being broken, there are no limits to the crazy. Yet, "off the chart" oscillators suggest the upside is limited.

January 31 - Buy back April live cattle 127 call to lock in quick profit of anywhere from $200 to $250 per contract before transaction costs.