Rebirth of the bull market or a head fake

The futures markets have voted: Did Donald Trump awaken the bull market in stocks?

It is no surprise the markets are fickle. Wall Street appeared to favor the stability of a Clinton regime but in the end they voted for growth policy following a Donald Trump victory. Whether or not the stock market's optimism will be mimicked in the economy is yet to be known, but for now we believe the euphoria could take us into year's end.

Stocks often find a significant low in October, this year it seems that low might have been a few weeks late. Nevertheless, seasonal strength and one of the most convincing key reversals we've ever seen has us looking higher. That said, volatile markets can change quickly. The bulls will need to break above 2165, until this occurs the bears are still alive.

Now that the election is over, the market "should" start focusing on the Fed. 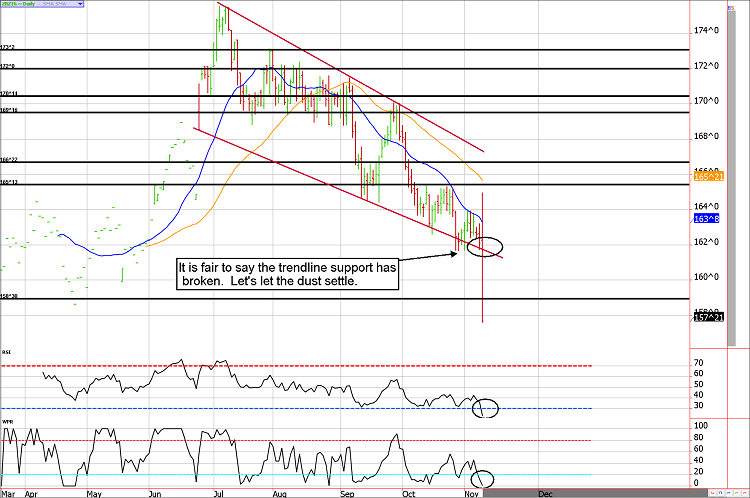 As this newsletter was being written, the 30-year Treasury bond had fallen 8 points off the overnight high. This type of volatility is rare; in my twelve (+) years as a futures broker I've only witnessed such a move on a handful of occasions.

Normally I would be looking at such a massive discount in pricing as an opportunity for the Treasury bulls; particularly in an environment such as this in which the seasonal pressures are bullish. However, given the complete breakdown in the chart and the overwhelming probability of margin calls in this particular market, we will reserve our opinion until we see what things look like when the dust settles.

With that said, the 10-year note is within a point of substantial weekly support and the 30-year bond is within about 2 points. There could be a good buying opportunity around the corner.

**Bond Futures Market Consensus:** Our idea of long call options was good, but traders would have had to have been nimble to take advantage. Let's see what the next day or two looks like before making any bold predictions.

Shock and awe in the ES 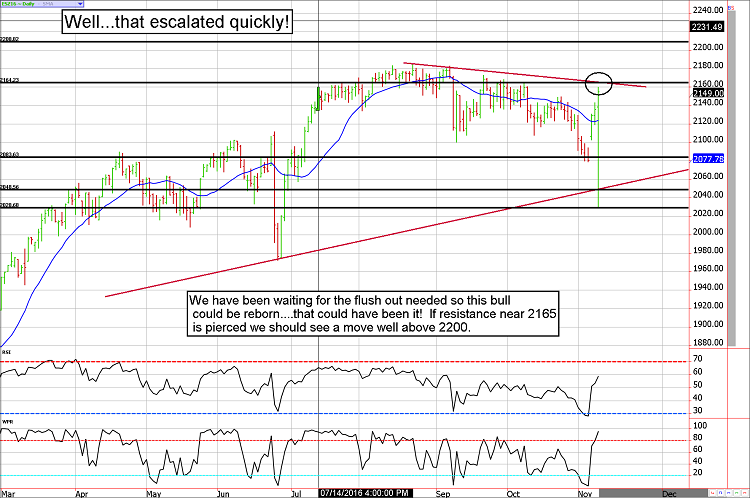 Election night volatility did not disappoint. Last night's trading session probably made some trader's dreams come true and turned into a nightmare for others. As advertised, the S&P sold off sharply on a Trump victory but to the surprise of many it rebounded even more on the prospects of economic growth.

Our put spreads performed relatively well but massive volatility worked against fill quality on the way out (last night) and our inclination to play it safe also cut into profits, but we don't regret it. Going into last night we had a FREE trade with no risk (thanks to fortunate timing as we legged in) so any profit was "gravy".

Throughout the years I've learned that more trading tragedies come from event risk than profits, so despite leaving money on the table we are happy with the way things turned out.

We do think the markets have turned the corner, but chasing them higher is a fools game. Let's see what it does with 2165.

**e-mini S&P Futures Market Consensus:**
That looks like a key reversal to us. Look for a break of 2165 to propel the bulls.

October 19 - Buy back December cattle 99 put, sell 2 92 puts and 1 106 call to replace it. this slows the trade down and spreads risk away from the current market price.

November 8 - Exit ES put spreads. This recommendation was made in the overnight session in high volatility. Fill quality and timing of exit varied, but most traders made a profit of $500 to $600 per contract before transaction costs.