Overnight volatility blamed on a surprise Australian interest rate cut, and weak data in China but...

Most business news stations were attributing the overnight selling in U.S. stock index futures to weak economic data in China, and an unexpected rate hike by central bankers in Australia. However, the Asian markets traded mostly higher on the news because they've fallen into the "bad news is good news" trap (weak data increases the odds of more stimulus). Further, lower rates in Australia should be a positive for the global markets overall.

We think a better explanation for the selling was the sharp move in the currency markets. The dollar index plunged well below 93.00, while the euro soared above $1.16. These are both major milestones, which were passed in volatile trade. Thus, we believe despite the fact that a weaker dollar will boost corporate earnings, the uncertainty of volatile currency trading prompted selling in U.S. and European equities.

Ironically, the seasonal low for the dollar and peak for the euro is due this week...so perhaps the currency markets are in the process of reversing course in the short-run. In short, last night's "break-out" might turn into a trap. 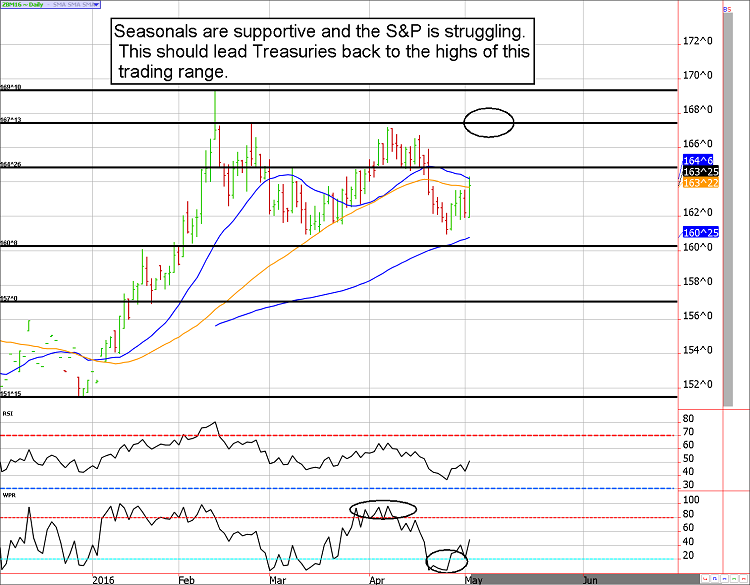 Treasuries failed to break below the recent lows last week. Since then, we've seen an impressive amount of buying in an environment in which the equity market is shaky and the greenback has lost ground. Thus, from both a charting and fundamental standpoint, there is plenty of evidence to support the idea of a return to the upper end of the trading range, which is in the high 160s for the 30-year bond, and in the mid-131's in the 10-year note. Should prices return to the highs, we'll likely turn bearish again.

**Bond Futures Market Consensus:** The "easy" money in bonds and notes might have already been made on the long side, but we continue to believe the rally will continue for the time being. Look for resistance near 168 in the ZB and in the mid-131s in the ZN. 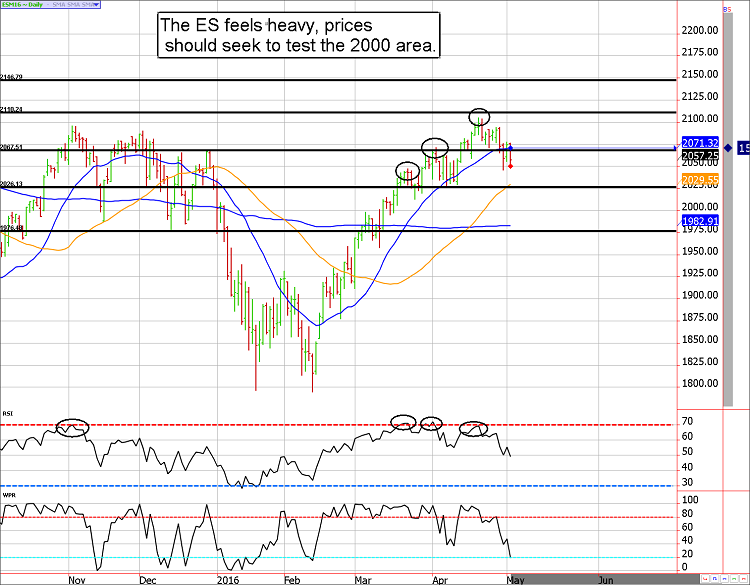 Thus far, this is a run-of-the-mill correction in the S&P. Will it become more?

The S&P 500 is in the midst of a rather tame correction. At the moment, that appears to be all it is. Despite a few large ranging down days, the ES is a mere 50ish handles (2%) from the recent high. We don't see any reason for the bears to get excited, or the bulls to panic, just yet. Nonetheless, we do believe the bears have an upper hand for the time being. In fact, according to our price models the ES "should" make its way toward the mid-to-low 2020s, and maybe even a full retest of 2000.

Keep in mind that the markets tend to be relatively volatile on election years. Markets don't like uncertainty, and this particular cycle is setting up to be one for the history books. There is no room for complacent bulls in this market.

**e-mini S&P Futures Market Consensus:** As long as the ES stays below 2073, the bears are in control.

March 17 - Sell a fresh ZN strangle using the May 130/128.50 strikes. This gets us into a more reasonable position which stands to profit from premium erosion (the previous trade was largely intrinsic value at the point of exit).