No surprise from Yellen, Treasury futures turn the corner

Trading volume was muted ahead of the Fed announcement

Pending home sales were a bullish surprise this morning. According to stats, homes under contract for sale were up 1.4% in March. However, it was the crude oil inventory report that garnered the largest reaction...at least until traders remember it was an FOMC day, and stock prices reverted right back to where they started. The S&P fell markedly following a $1.00 drop in crude oil futures at the hands of the latest weekly inventory report, but both oil and the S&P recovered later in the day.

Naturally, the story of the day was the Fed. The Fed didn't change interest rate policy, as was widely expected. They also basically copy and pasted their policy statement from the last meeting. In short, today's FOMC meeting was a non-event. 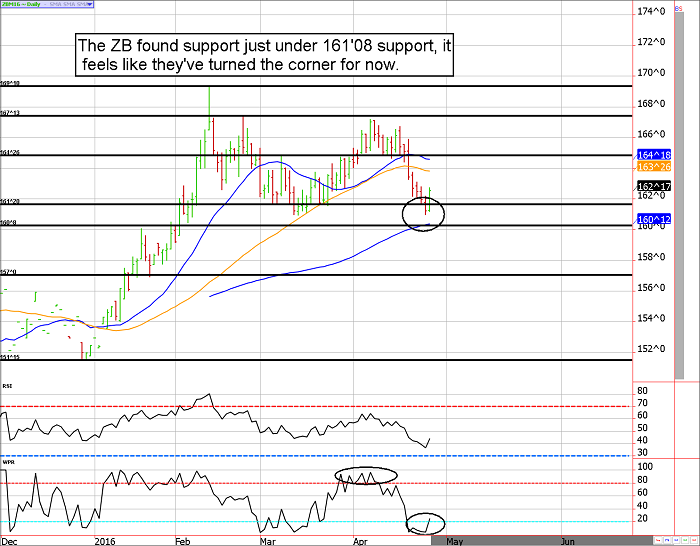 Interest rates are low, but they are lower around the globe.

Fundamentally, it doesn't make sense for investment dollars seeking safety to purchase sovereign debt at zero, or even negative interest rates, when it is possible to purchase U.S. Treasuries with a higher credit rating and a better yield. For this reason, it is difficult to see Treasuries continue to fall out of favor.

Some of last week's selling was based on speculation that Saudi Arabia would be forced to dump U.S. Treasury holdings. However, we've since learned that the Saudi's are holding a fraction of the Treasury securities some of the more aggressive speculators were assuming. Further, although they are strapped for cash, oil is firming up and they likely don't need to liquidate any of them; and it doesn't seem they will be forced to liquidate (which was thought to be the case based on the proposed 9/11 Bill).

In our opinion, Treasuries have turned the corner and should make their way higher in the coming weeks.

**Bond Futures Market Consensus:** Stocks are overstretched on the upside, and Treasuries are oversold. The best trades might be from the long side of Treasuries. 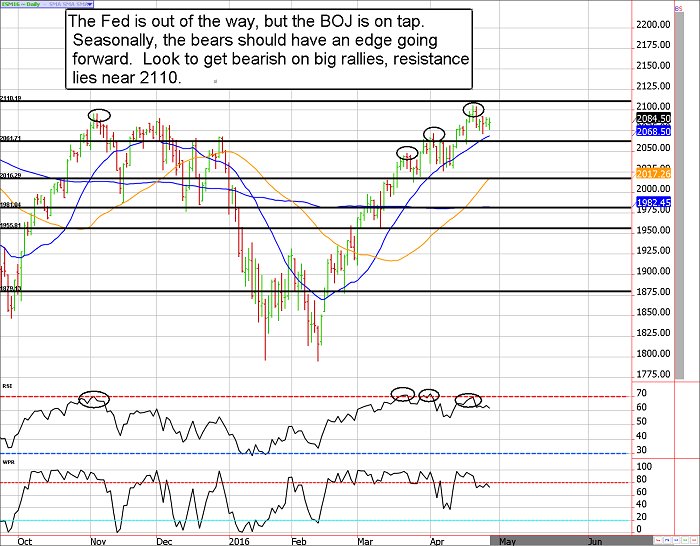 Is it time to Sell ES Futures in May and go away?

According to the Stock Trader's Almanac, the "best six months" for the stock market end with April. Further, the months of May and June were horrific between 1965 and 1984; as a result the mantra "Sell in May and walk away" is something we hear a lot of every year. To be honest, it probably works more than it doesn't, however, that doesn't mean selling on May 1st is easy money. For example, sometimes the equity market moves sharply higher most of May, to find a peak later in the month. Although that year would technically be a "success" in regards to the mantra, it doesn't necessarily translate into profits.

With that said, it hasn't paid to be bullish stock from May through November. Also offered by the Stock Trader's Almanac, a $10,000 investment (we assume they are referring to the S&P) compounded to $838,486 for November through April over 65 years, compared to a loss of $221 for May through October.

If historical tendency has anything to do with it, the best trades in the ES will likely be from the short side as we move into the summer months. After all, this election cycle could get pretty wild!

**e-mini S&P Futures Market Consensus:** The ES feels like it is rolling over, if there is one last hurrah rally it will run into sharp resistance at 2110. Look to get bearish on sharp rallies!