The e-mini S&P 500 is technically neutral

Crude and the Yen reverse yesterday's moves, so does the ES

Obviously, the market panicked a bit when in regard to the implication of a Yen rally. Although this is the highest we've seen the Yen in years, it is still historically cheap. Further, today's reversal suggests the unwinding of the carry trade isn't quite upon us. Accordingly, this should be somewhat supportive of the equity markets.

On another note, the greenback is still trading sluggishly, but it has yet to break support. In theory, weakness in the dollar should help push commodity prices higher, and eventually the stock market as well. As a result, we'll need to keep an eye on the DX support near 93.00. 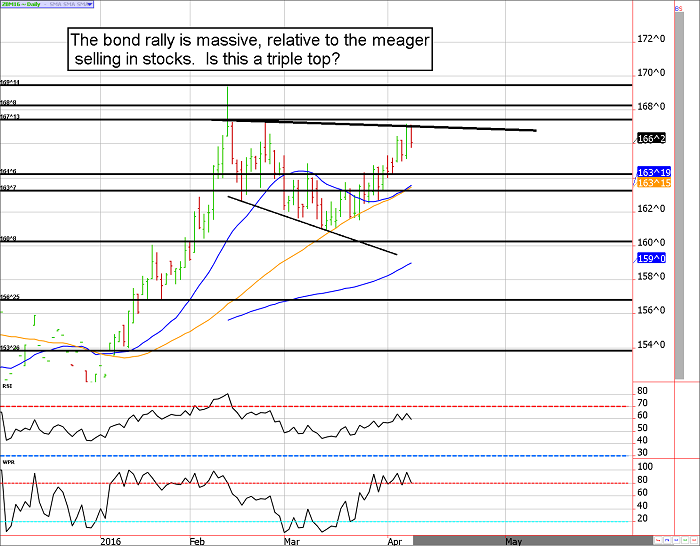 As is generally the case, the Treasury market was over-bid yesterday as fear took hold, but relaxed today as cooler heads prevailed. Unfortunately, it is easier said than done, but the general rule of thumb is that "you can't make money panicking".

Bonds and notes have both (nearly) tested the January and February highs, which occurred as the S&P was closer to 18000. Consequently, it seems a lofty goal for the bulls to keep prices at such elevated levels. We've been early, or maybe wrong this week, but we are leaning lower.

**Bond Futures Market Consensus:** The ES seems stable, that should keep the bears in control of Treasuries. 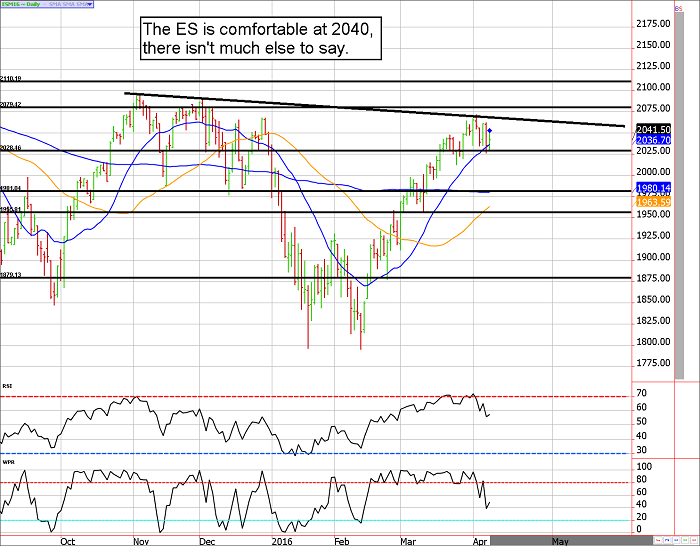 The ES likes 2040, prices are neutral

Although the stock market is probably closer to a major high, than a major low, the current short-term valuation is merely neutral. Despite some rather large moves up and down, the S&P migrates back to the mid to low 2040s. Thus, we can't think of any reason to be overly bullish, nor overly bearish given the equilibrium price action. With that said, should prices find their way to 2080, it would likely be a good place for the bears to get positioned.

**e-mini S&P Futures Market Consensus:** We are relatively neutral for now, but a move to 2080 would pique our interest in getting bearish.