It's been a confusing day for the financial futures markets

Last week we heard several Federal Reserve Presidents tout their hawkish stance; they went as far as to say an April rate hike is on the table. However, the Fed Chair Janet Yellen, took the other side of that argument in her speech to the Economic Club of New York. She emphasized measured and gradual rate hikes were the "only" way to go. She reiterated, the pace will be so slow the process could take years. However, she also stipulated the decisions made in each FOMC meeting will be data dependent.

It seem to us, market participants would be better served simply ignoring the chatter of Fed Presidents, and focusing solely on the Chairman. Doing so would certainly reduce some of the noise caused by overzealous speculators.

Contrary to the Fed Chair's suggestion that the economy still needs to be nursed back to life, Pending home sales were up 3.5% in February and the Case-Shiller 20-city Index saw a 5.7% increase in January. Further, the March Consumer Confidence Index jumped to 96.2.

If the Fed's trajectory of interest rates are truly data dependent, it seems the road is paved for another hike sooner rather than later. Like we said...confusing. 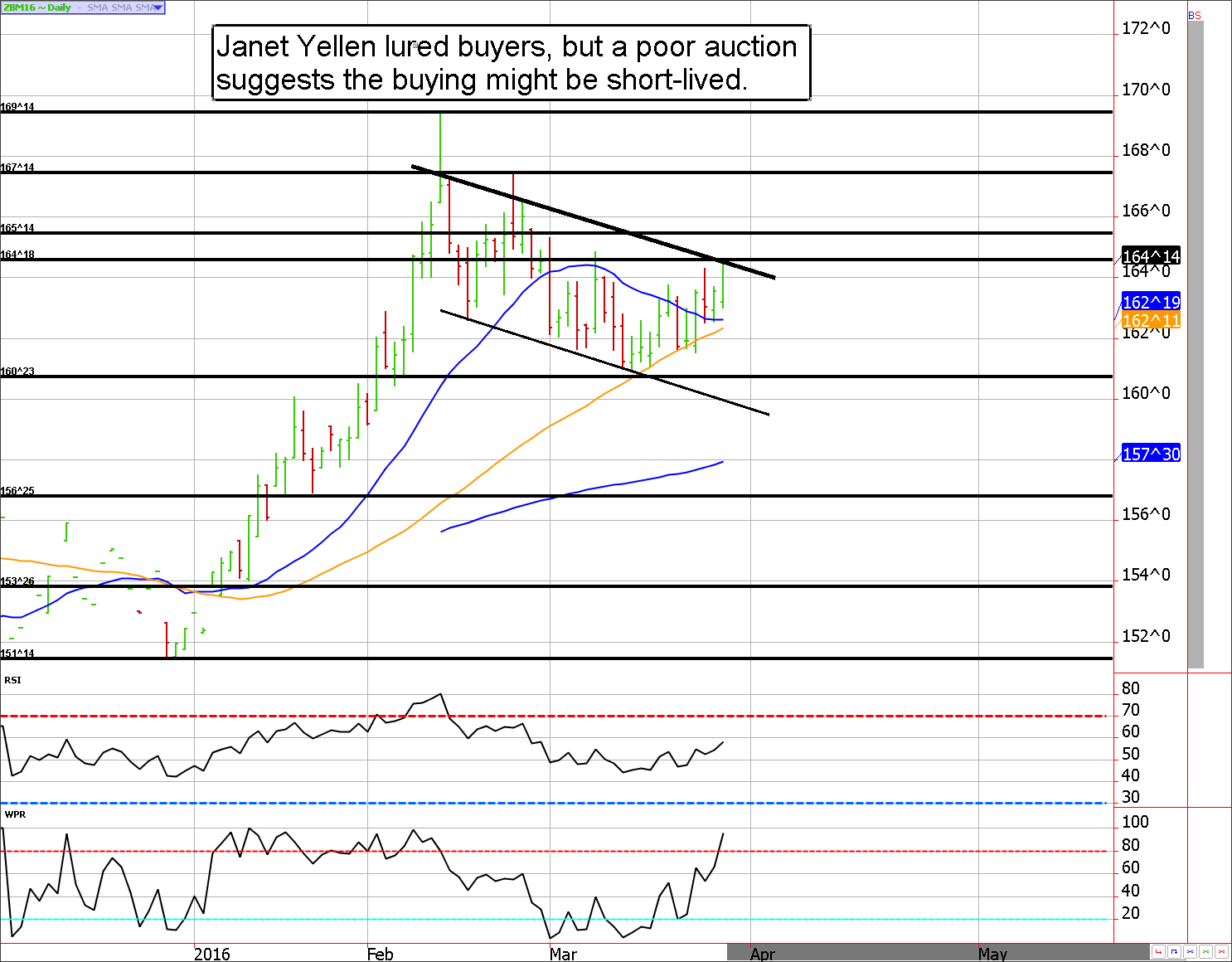 Although sluggish ahead of the long weekend, bonds and notes found bullish interest on the heels of Janet Yellen's dovish speech. Volatility was exacerbated by the fact that the market had been consolidating for several days before making the move.

Yet, the the ZB chart suggests prices "should" find resistance near the upper end of the current trading channel. The ZN, on the other hand, has now retraced roughly 62% of the previous decline. According to Fibonacci theory, this should be "enough". Accordingly, it feels like the upside should be limited from here. Likewise, Treasury auctions conducted on Monday and Tuesday were graded a C- by Rick Santelli due to a lack of demand.

**Bond Futures Market Consensus:** Both the ZN and the ZB should be near resistance levels. Reversal? 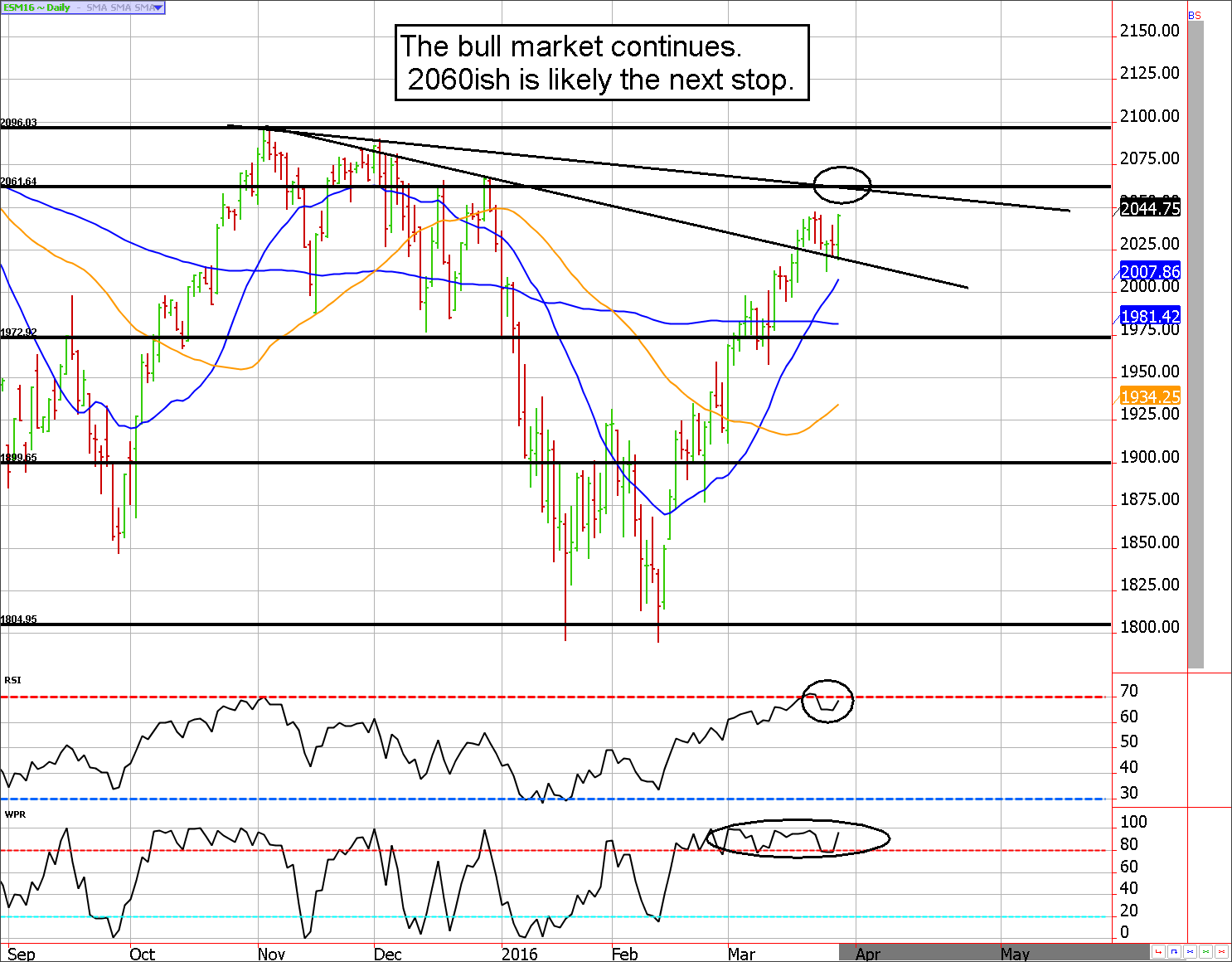 Well, 2064 is probably in play in the ES Futures

Anybody trying to trade futures over the long holiday weekend, likely had a rough go at things. Price action has been choppy, and completely against what historical stats suggested would be most likely on the Thursday through Monday surrounding Easter.

At this point, it is hard to fight Yellen and the trend. We have to go with the premise that the S&P will seek to test it's downtrend resistance near 2060/2064. At this pace, we could be there in a day or two.

With all of that said, the monthly employment report is already upon us. On Friday morning we'll hear the latest jobs data; with prices at already lofty levels we can't help but feel like the short squeeze will continue into the report. If it does, however, there "should" be a good opportunity for the bears "up there". We will likely be shopping around for short call option opportunities!

**e-mini S&P Futures Market Consensus:** The mini correction in the ES didn't live up to our standards. Nevertheless, the bull market is back and 2060/2064ish will probably be seen shortly.

March 29 - Buy back April ZN puts to lock in a profit.