FOMC and option expiration on deck, back and filling in ES futures?

Two consecutive days of sharp crude oil declines reminded traders of the chaos energy markets inflict on the financial markets. As a result, the e-mini S&P suffered moderate losses in overnight trade. However, it was weak economic data that kept prices under pressure throughout the session.

February retail sales came in at a a negative .1% for both the headline number and ex-auto. Although this was an improvement from January, it is hardly reason to go out and buy stocks. Similarly, the Empire Manufacturing data improved markedly from last month to a positive 0.6, but simply posting a slightly positive number isn't enough to get investors excited. Today's PPI data, reported a decrease in prices at the producer level of .2%. Thus, last month's hint at inflation was dissolved.

Tomorrow we'll hear about the latest data on consumer prices and housing starts, but I'm not sure it will matter to the market. All eyes are on the FOMC interest rate decision, which will be released at 2:00 Eastern. 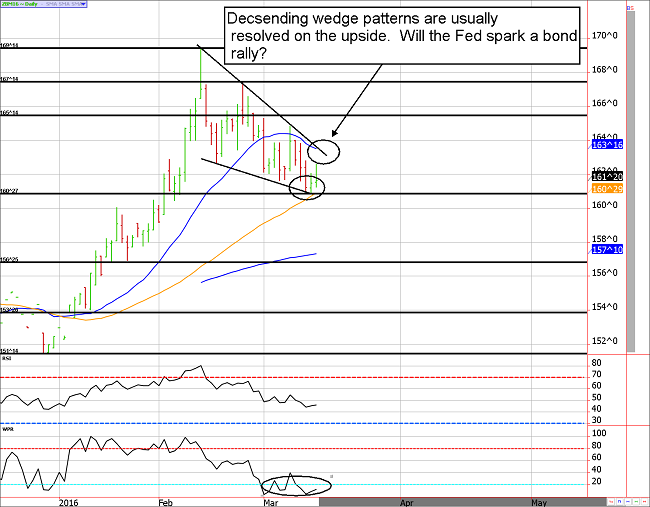 We found the latest CFTC COT Report interesting in that it paints a picture of bullish large speculators in Treasuries (10-year note), at a time in which small speculators are getting slightly shorter. Neither of these groups of traders are holding substantial positions, but it is clear they are leaning in opposite directions. Further, we have to side with the "big boys" on this one. As we know, small speculators haven't fared will in their bearish Treasury bets for quite some time.

It "feels" like the Treasury market has priced in a chance for a Fed rate hike or two, in 2016. Any inclination by the Fed that they are "on hold" indefinitely, should send bonds and notes higher in tomorrow's session. On the contrary, if the Fed insists it is on track for multiple hikes this year, the Treasury complex might sag slightly (even in this scenario, we don't expect big sellers to come in as much of the bearish tilt is likely built into pricing).

**Bond Futures Market Consensus:** Treasuries suffered at the hands of the ECB, but they are still "cheap" relative to global bonds. Can we get a mercy bounce? 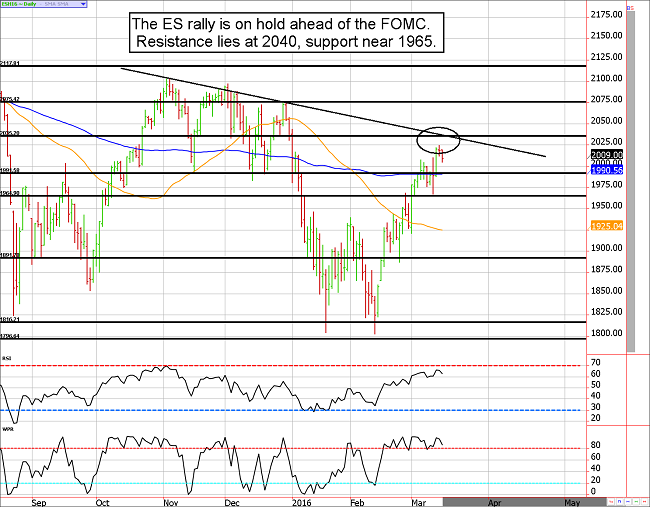 **We used the March ES futures for charting and technical levels today, but we'll be moving into the June contract tomorrow!**

It is a relative "given" the Fed won't raise rates tomorrow. However, guessing the market's reaction to accompanying commentary is a complete crapshoot. We doubt prices will simply stay put; we believe the ES is destined for 2040 or 1965...but unfortunately, it is impossible to know which we'll see in the coming days.

Our best guess is for a move to the mid-1960s. This assumption is based on the premise of slightly overbought pricing, and the fact that the "smart money" (large speculators) is net short the ES, while the "dumb money" (small speculators) is long.

With that said, if you are looking to be a bear ahead of the Fed, don't get greedy. Seasonals in late March are positive, so any dip might be relatively shallow. We still believe 2040 will be seen.

**e-mini S&P Futures Market Consensus:** Trend line resistance lies near 2040 (March), we'll probably see it sooner rather than later but the chart is suggesting a possible dip into the 1960 area first.

DeCarley Trading (a division of Zaner)
Twitter:@carleygarner
This email address is being protected from spambots. You need JavaScript enabled to view it.
1-866-790-TRADE(8723)
www.DeCarleyTrading.com
www.ATradersFirstBookonCommodities.com
**There is substantial risk of loss in trading futures and options.** These recommendations are a solicitation for entering into derivatives transactions. All known news and events have already been factored into the price of the underlying derivatives discussed. From time to time persons affiliated with Zaner, or its associated companies, may have positions in recommended and other derivatives. Past performance is not indicative of future results. The information and data in this report were obtained from sources considered reliable. Their accuracy or completeness is not guaranteed. Any decision to purchase or sell as a result of the opinions expressed in this report will be the full responsibility of the person authorizing such transaction. Seasonal tendencies are a composite of some of the more consistent commodity futures seasonals that have occurred over the past 15 or more years. There are usually underlying, fundamental circumstances that occur annually that tend to cause the futures markets to react in similar directional manner during a certain calendar year. While seasonal trends may potentially impact supply and demand in certain commodities, seasonal aspects of supply and demand have been factored into futures & options market pricing. Even if a seasonal tendency occurs in the future, it may not result in a profitable transaction as fees and the timing of the entry and liquidation may impact on the results. No representation is being made that any account has in the past, or will in the future, achieve profits using these recommendations. No representation is being made that price patterns will recur in the future.