Are we finally going to see the correlation between stocks and oil soften?

In overnight trade, it was the same 'ol, same 'ol. Crude and stock index futures moved together in lockstep; we saw the same action in early day session trade. Yet, after the Fed meeting, each market seems to be willing to have it's own reaction to the Fed news. Crude oil squeezed, and held, well into positive territory while the stock market remained under moderate pressure. This probably isn't an immediate game changer, but it is a step in the right direction and is worth noting. Both assets trading as one isn't healthy for the financial markets, or the commodity markets. In fact, it should eventually be bullish for stocks...after all, they've taken a hit at the hands of the crude oil futures slide.

The big news of the day was the Fed meeting. The meeting itself was considered to be "dead" going in. This means that few (nobody) believed there was a chance for a policy change, but traders were hoping for hints regarding the pace of upcoming interest rate hikes. In a nutshell, they were very careful to leave a rate hike in March as a possibility, while simultaneously noting softening conditions that probably won't warrant another immediate tightening of credit. In the end, the news was relatively neutral to slightly bearish for stocks, but seems to have been enough to throw cold water on market volatility, which is a blessing in itself. 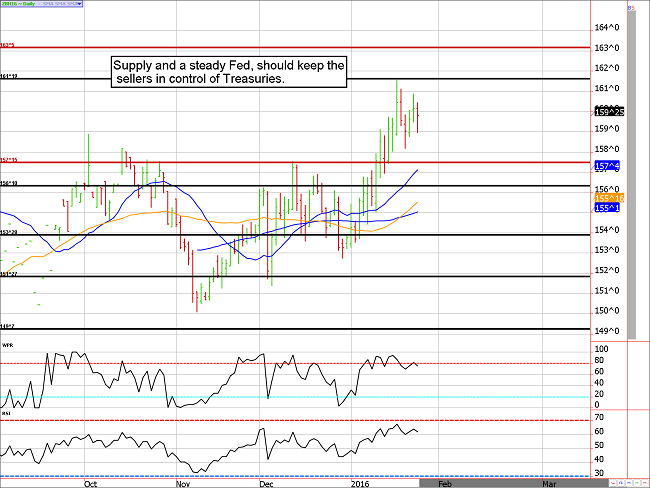 We are a little surprised at the lack of selling in Treasuries. Prior to the Fed meeting, bonds and notes were down moderately, but in post Fed trade they had squared most of the losses. In our view, the Fed was a little more hawkish than most were expecting which should have lured more selling in bonds and notes, but that wasn't the case. After all, in light of the Chinese market collapse and last week's soft patch of data, it would have been easy for the Fed to have at least removed the possibility of a March hike altogether....but they failed to take the opportunity.

From a technical standpoint, the market is forming a pennant pattern. If the bears are going to win this battle, we need to see a break below the mid 158s in the ZB. Likewise, a break above 161 could mark trouble for the bears and victory for the bulls. We are cautiously leaning lower for now.

**Bond Futures Market Consensus:** Barring any calamity in stocks, the path of least resistance should be lower for Treasuries in the coming week or two. 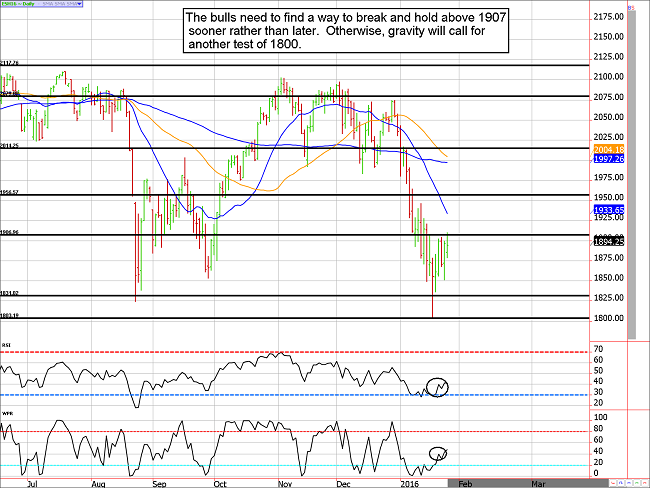 The Fed didn't deliver, but they didn't completely drop the ball either

The market has proven it doesn't pay to marry a position. Swing traders are likely faring well in this range bound trade, but position traders are likely having a rough go at things. Despite the nasty bloodshed on stock market quote boards today, the market has been making higher highs and lower lows since last Wednesday's dramatic plunge.

We were hoping the Fed would ease investor concerns enough to push prices above 1906 for good, but a move to the noted level was short-lived. Back into the trading range we go, leaving earnings reports as the only hope for the bulls to break-out in the foreseeable future. If prices can't get above 1907 soon, we'll likely succumb to a retest of the 1800 lows, and maybe even 1770....but we'd prefer not to see it.

**e-mini S&P Futures Market Consensus:** 1906 resistance has held better than we thought it would, but lower lows gives the bulls some hope. We are cautiously leaning higher, but the bulls need to get something going soon to avoid another sweeping sell-off.