Futures markets are recalibrating to China, but most of the pain is probably over

As is almost always the case, thinly traded holiday markets made for some exciting trades. Perhaps they were most exciting for those on the sidelines watching from afar. A smart colleague summed up his trading in December with the following statement, "The holiday markets giveth, then they taketh away...and then some."

Volume on Monday was on the skimpy side as traders were still enjoying the holiday environment, but China essentially forced traders back to the markets. The Chinese government quietly implemented circuit breaker rules that forced the Chinese stock market to halt trading for two sessions in a row. In fact, today's session (which occurred last night for us) lasted only minutes before trade was halted.

Failure of the Chinese government to allow the markets to properly react to market conditions triggered a global sell-off. At times like this it is important to remember that the Chinese stock market is in its infancy, and is being regulated by an entity that detests capitalism. Nevertheless, they seem to be learning that markets cannot be controlled. The circuit breakers will be bypassed on tonight's market open. In our opinion, this is a big step toward stabilization; after all, with circuit breakers in place buyers were not allowed to step in to cushion the fall. 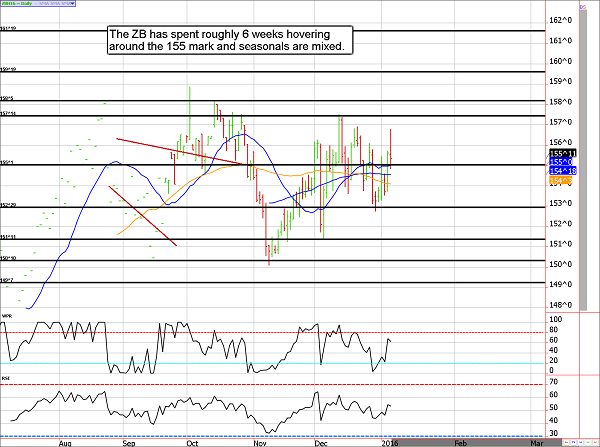 Bond Futures have been essentially directionless

The ZB and ZN have hovered in a tight range for several weeks (months in the case of the ZN). As a result, trend traders have been pulverized and swing traders have probably fared pretty well. Yet, we have a feeling the environment will see a dramatic change sooner, rather than later. If so, swing traders could be in store for frustration, while trend-traders might have a nice run. This is because, interests rates rarely stay quiet for long. We are expecting a rather large breakout at some point in the first quarter of 2016. Unfortunately, pinpointing the timing and direction will be tricky.

**Bond Futures Market Consensus:** We think there are bearish opportunities in notes and bonds near 128 and 158 respectively.

Both bonds and notes are hovering near levels which have previously triggered reversals. Thus, it is difficult to be bullish yet, the prices to be comfortably bearish won't come into play without a substantial rally. For now, we'll look for a potential run into the 158 area in the ZB, and the 128 area in the ZN to turn bearish. 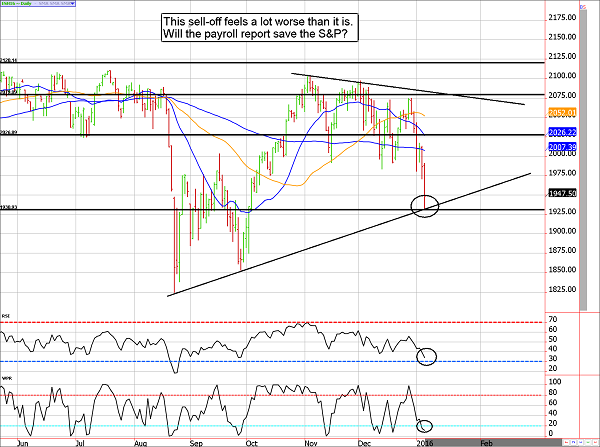 China policies are breeding panic, but they might also be breeding opportunity

Price controls don't work, even in a communist country, because they prevent market participants from price discovery. Luckily, the Chinese government realized this relatively quickly and will open the flood gates in the next trading session. The most likely result will be swift selling on the open, but we suspect it will attract some buyers. Thus, get ready for plenty of overnight volatility.

To make things even wilder, the market will be digesting the latest U.S. employment data tomorrow morning. Perhaps, the positive light it sheds will "save" the S&P. Look for large dips overnight and tomorrow morning to try to get bullish, once the lows are found, the rally will be sharp!

If we get another round of selling in the morning, we'll likely be shopping around for short put opportunities.

**e-mini S&P Futures Market Consensus:** This market is a mess, but in the end the bulls will probably show up. Look for a probing low following the jobs numbers tomorrow morning.