After today, the payroll report seems like child's play

The thing about tables is, they ALWAYS turn; the same can be said of market trends.

Just as I was preparing to type the sentence, "In my decade+ experience as a commodity broker, I've never seen anything like what we saw in the euro today", a correspondent on CNBC pointed out the March 2009 euro rally. On March 18th of 2009, the Fed announced a round of Quantitative Easing that sent the dollar reeling and the euro soaring. On that particular day, the euro was up about 3.5%. At the peak of trade today, I believe the euro was up about 3.3%. (I'd to the math, but it won't change anything and I've had a long day).

Ironically, we had been looking for the seasonal euro rally for several weeks with a short put strategy, but couldn't justify holding on to the trade into the ECB meeting. Instead, we decided to buy back our puts and sell strangles; a decision that, and the time, was sound in nature; but in hindsight was horrible. We were bullish, why get into a neutral strategy?

Nevertheless, after a lot of intraday shucking and jiving, we appear to have survived. Unfortunately, I'm not sure many traders survived the day. The way the Euro was running high in clips of 10 to 20 pips at a time, is a clear indication of margin call buying and risk manager liquidation of futures accounts. We suspect the margin calls will continue into the night session and tomorrow (and this includes the ES). So look for another round of selling in the ES, and buying in the euro. We've heard rumours of some big hedge fund blow ups, and I can assure you there are enough retail trader casualties to fill a large graveyard. 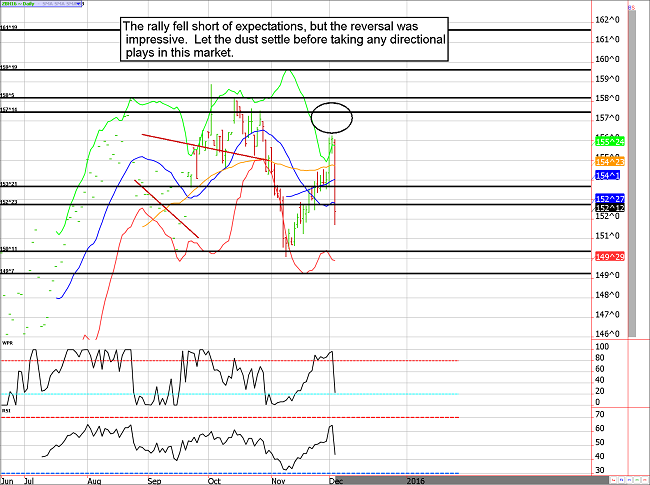 The chart told us the Treasury futures rally was over, but we didn't listen

Before today, Treasury charts were screaming "overbought" and waiving red caution flags to anyone still long the market. Although we certainly recognized the market was due for a pullback before resuming the seasonal rally, we absolutely failed to see such a massive day of selling. In hindsight, it is easy to see the signs, but in real time the bond market had seasonals it its favor, and no other troubling indicator (the COT Report was neutral to bullish the ZN, market correlations to currencies were mixed, and the Fed was likely to implement a "one and done" campaign). This example just goes to show how important the chart is. Once the oscillators were screaming saturation, the buying dried up.

We aren't sure what to make of the current chart setup, other than stating the next opportunity for the bulls won't be seen until the 149/150 area.

**Bond Futures Market Consensus:** The bears won this battle. Follow through selling could see the 150 area in the ZB. The bulls might want to get interested down there.

You should be trading the March contract now, these figures are based on March futures contract. 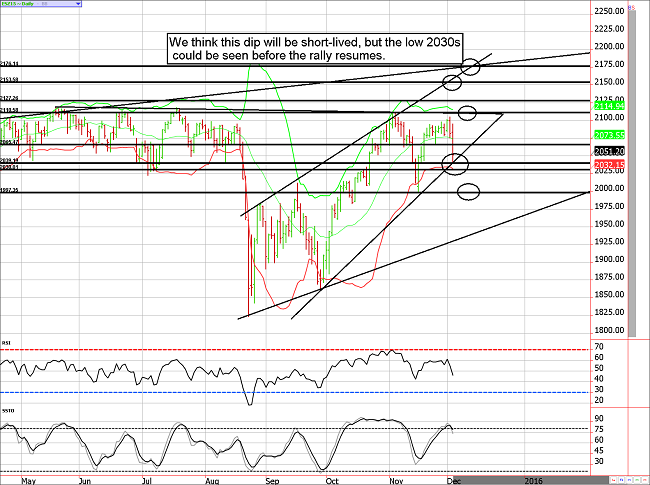 2100 WAS key technical resistance, but it the cookie didn't crumble the way we thought it would.

Resistance near 2100 in the ES was broken yesterday, but we all know now it was nothing more than a bull trap. Since that "break-out" we've seen the ES decline into the low 2040s. As discouraging as this move was, it doesn't change the facts...December are usually bullish. Also, it isn't uncommon to see an early month dip ahead of the Santa Claus rally, so there is still hope for St. Nick to deliver.

From a charting standpoint, today's low was found almost exactly at trend-line support. While I do believe we will see the low 2030s on this move as the market runs stops and reacts to tomorrow's jobs report, I believe this dip will soon prove to be a buying opportunity. Don't forget, there is a Fed meeting next week...which traditionally supports the equity markets.

**e-mini S&P Futures Market Consensus:** Look to get bullish in the low 2030s. Today's panic, is most likely tomorrow's opportunity.

November 30 - Roll the January nat gas 225 put, into a January 210 put and a February 205 put. This gives the market some much needed breathing room.

December 3 - After a wild day, another euro adjustment is necessary. Buy back the existing strangle (near break even), and sell the 106/113 strangle in the January euro.