Option Expiration and holiday rally could start next week

Holiday futures markets are around the corner

Perhaps the most valuable lesson I've learned in my decade (plus) time as a commodity broker is that holiday markets are not to be reckoned with. Volume is light and trading desks are filled with the second, and third, string staff. As a result, the markets can make dramatic and uncharacteristic moves. An example of this that still stings, is last year's Thanksgiving day crude oil futures collapse. The market was technically closed for the holiday, but the CME decided to let futures trade for an abbreviated session on the morning of Thanksgiving day. As a result of the light volume, and an ill-timed OPEC meeting, crude oil fell roughly $7.00 in single clip. In a nutshell, this is the time of year to keep trading light.

In regards to the S&P and Treasuries, the holidays have an interesting influence on trade. Nearly every year (I'm not exaggerating), we see an end of the year melt-up. It is often a very slow moving grind, but it eventually adds up to a significant move.

More pertinent to the current market; the week of Thanksgiving is statistically highly bullish. In fact, the Stock Trader's Almanac suggests that it might be a good idea to look for weakness prior to Thanksgiving to enter bullish trades, and strength after the holiday to exit. In fact, in the Dow, netting the day before and after Thanksgiving day has combined for only 13 losses in 62 years. 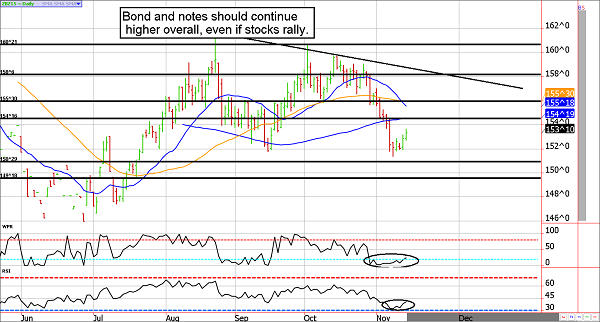 The path of lease resistance in Treasury futures, is likely higher for now

The Treasury market has been absorbing supply from this week's bond and note auctions, in addition to the realization the Fed will likely take action in December. Both of these bearish developments have attracted short sellers to the Treasury complex in droves. However, this complex has been very unforgiving to the complacent bears. We can't help but feel we'll get a repeat of the pattern of massive short squeezes. In other words, the best trades in Treasuries will likely be from the long side of the market in the coming weeks.

It is clear that the market is leaning lower at what could be an inopportune time. Just because the Fed will be raising overnight borrowing rates, doesn't guarantee longer-dated securities will react accordingly. The first rate hike, and probably a few more, have already been priced in.

Year-end seasonals are bullish in the bond and note markets, the chart suggests long-term support is looming, technical oscillators are oversold, and speculators are overly bearish. All of these things point toward an imminent reversal.

**Bond Futures Market Consensus:** A December rate hike and this week's auction is priced in; the path of least resistance should be higher from here. 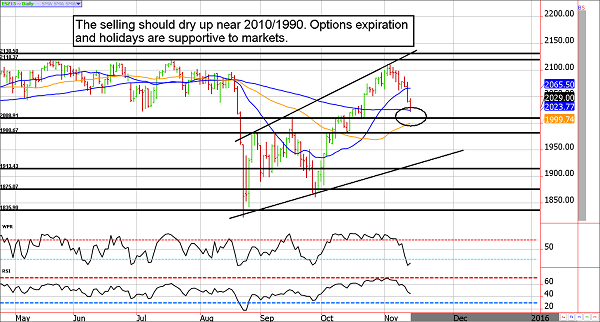 The correction in the ES is likely limited

In our opinion, the S&P futures market is simply reversing the latter part of the October short squeeze. Truth be told, the market probably shouldn't have traded higher than 2050 on the last rally but sometimes markets are temporarily irrational. Nevertheless, now that we've seen some back and filling we believe the buying power has been reloaded and should resume to put together a rally going into the latter part of November.

Next week is option expiration; the most common pattern is for the market to find some sort of low on the Friday prior to expiration before rallying through Wednesday or Thursday of expiration week. Thus, we believe the selling could be drying up soon.

Further, as mentioned above, the following week will be Thanksgiving which regularly sees sharp gains in the S&P 500. If you are holding bearish positions, you should be pulling in the reigns or taking profits altogether. In our view, a retest of the October lows is highly unlikely making the downside potential meager in comparison to the upside risk.

**e-mini S&P Futures Market Consensus:** 2010 or a little lower could be seen, but a reversal should occur in the coming session or two.

October 29 - Buy back the December ES 2110 calls and sell twice as many of the 2140 calls. This should give the market room to breathe.

November 13 - Buy back the short ES 2140 calls to lock in a small profit (anywhere from $250 to break-even per lot traded) before transaction costs).