Light trading volume in the ES, melt up

Where did the ES futures volume go?

At the time this newsletter was being written, volume in the December e-mini S&P was creeping up on the one million mark in contracts traded. This is dramatically lower than the 1.5 to 2.0 million we were starting to get used over the last three or four weeks of trading.

Our theory is that many of the highly leveraged market participants have moved to the sidelines after a rough period of trading. Don't forget, bear markets lure traders to the futures markets like flies on "fertilizer". This is because most speculators believe there is quicker, and bigger, profits to be made during sell-offs than can be made during a bull market phase. Their assumption is true, but it also comes with elevated risks.

The big sell-offs in August and September brought traders to the markets, but the October rally has likely chased them back into hiding (particularly the massive short squeeze seen on Thursday and Friday of last week).

What does this mean going forward? Two things stick out in our minds; first, the e-mini S&P 500 bears will think twice about selling into a market that has burned them (twice). Second, if these traders stay sidelined and volume remains light, the path of least resistance will continue to be higher in the stock market (light volume tends to see melt-up type of trade).

We are roughly a week away from the Fed meeting, Treasury futures traders will start positioning soon

The "market" collectively has decided that the Fed will NOT raise rates next week, but we are surprised at the lack of focus on the upcoming FOMC meeting. After all, we've been drowning in commentary and opinions weeks ahead of previous meetings this year. Thankfully, earnings season seems to be taking some of the attention away from the event. Regardless of the cause, we are certain the chatter will turn into a roar in the coming days.

Generally speaking, talk of the Fed meeting should keep a bid under pricing in Treasuries for now. However, we believe that sooner rather than later, the current bond and note rally will fail. If the bears are lucky, there will be an opportunity on, or around, the Fed meeting to get into bearish positions near the recent highs; 162 in the ZB and 130 in the ZN. 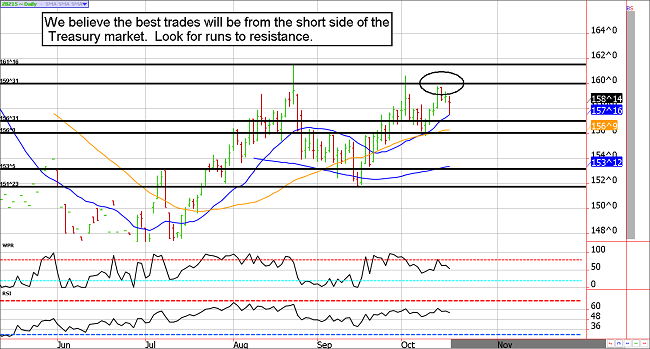 **Bond Futures Market Consensus:** The highs are likely in, or at least near, for now. Look for places near resistance to get bearish.

By some measures the ES is getting toppy, but in our opinion the rally has another leg higher.

Bearish technicians are pointing out overbought oscillators and a nearly full retracement of the August collapse as evidence that this market has come "too far, too fast".

We beg to differ. The bears didn't seem to complain when the ES dropped from about 2100 to 1820 in a handful off days in a move that truly was "too far, too fast". Additionally, the December e-mini has another 20 handles to go before hitting the down-trend line that dates back to the July peak.

We remain optimistic into year's end due to seasonal tendencies, and help from the greenback. Nevertheless, there could be some corrective action from the 2040/2050 area. The bears might look for those levels to establish positions. 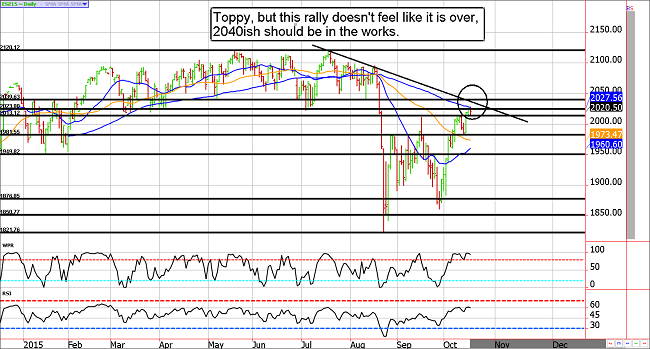