The FOMC Minutes ARE a big deal for ES Futures Traders

Historically FOMC minutes have been an afterthought, but in today's climate they are a big deal to futures traders

The futures markets have been hanging on every word that trickles from the mouths of Federal Reserve members. Even off-handed comments made on their personal time have been moving through the grape vines.

Today's FOMC minutes didn't offer any surprises. The Fed feels like the U.S. economy is moving in the right direction, which justifies a rate hike. But overseas market turmoil (namely China) has them pressing pause. The market seemed to like what they heard.

In more bullish equity market news, the Chinese stock market opened for trade today after being closed for an entire week in observance of a national holiday (this is odd to us because it is essentially illegal in the U.S for the stock exchange to be closed more than 3 consecutive days). Once the bell rung, Asian traders bid prices higher to catch up with the global equity market rally that had taken place without them. 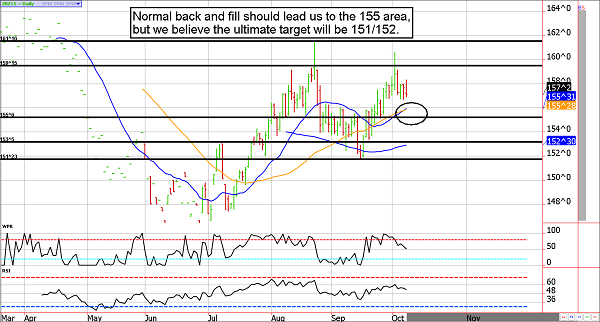 The FOMC minutes seemed to take some of the uncertainty out of the timing of the next rate hike. The market had originally interpreted the Fede's press conference statements as insinuating that softening in China was enough to derail the U.S. recovery. However, the notes seemed to depict only minor concerns. Are the FOMC minutes manipulated or filtered? Maybe, maybe not...but it doesn't matter. The only thing that matters is the direction of the market.

Today's 30-year bond auction included $13 billion in securities, which were met with solid demand. The indirect bidders, which are assumed to be foreign investors, were as aggressive in today's auction as they have been since 2009. Treasuries initially reacted to the upside to the auction, but eventually the FOMC minutes lured sharp selling into the market.

In our view, bonds and notes should continue lower for the time being.

The ES bull is alive and well!

"Everyone and their dog" is assuming the current S&P rally will fail. However, that alone is enough to make us think the sky is the limit. Even so, there will be some temporary resistance near the 2010ish area. You might recall this as last month's high, and it would also be an inflection point for most technical oscillators measuring overbought levels.

Aside from the fact that active traders appear to be net sellers, which means they must buy back to cover as prices squeeze higher; seasonal pressures tend to be overall bullish from now through the end of the year. Thus, a break above resistance could open the door for a massive short squeeze.

**e-mini S&P Futures Market Consensus:** 2010ish is heavy resistance, but we have a feeling any selling will be temporary. We believe 2100 to 2150 is back on the table!

October 7 - Buy back December live cattle puts near 45 to lock in a quick profit ($220 to $250 per contract before transaction costs).