The e-mini S&P 500 futures are on shaky ground

The last week (or so) of September is notoriously weak for equities, and strong for Treasuries. We don't see any reason to buck the seasonal trend. After all, Friday's bloodbath on Wall Street is a sure fire sign that investors have not gotten over the mid-August stock market "crash".

Although the Fed meeting is behind us, we still have to worry about the details of Janet Yellen's speech on Thursday at the University of Massachusetts-Amherst. Oddly enough, the financial markets sometimes react to non-FOMC speeches than they do the official Fed meetings. Be prepared for volatility. 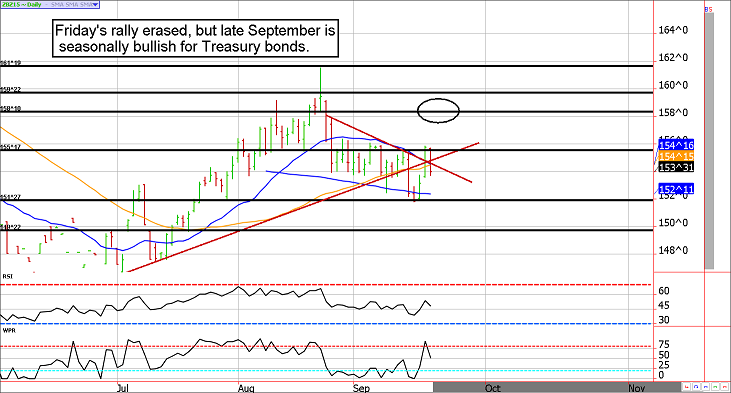 No mercy for bond traders

The bond market is playing a treacherous game of switchback; those on the wrong side on the wrong day are paying for the error dearly. Going into the weekend we were all but certain the 30-year bond would break through resistance in the mid 155s, and make its way into the high 150s. However, today's trade is telling the opposite tale.

If the trading range continues to guide trade, the December ZB could traded back into the mid 151 area. If you are a bull, that will be the area to start getting interested again. If history repeats itself, the path of least resistance for Treasuries should be higher in the coming weeks.

**Bond Futures Market Consensus:** We'd rather be bulls than bears due to seasonal tendencies and a shaky equity market, but failure at the top of the range leaves prices vulnerable to a slide back to the mid-151s. 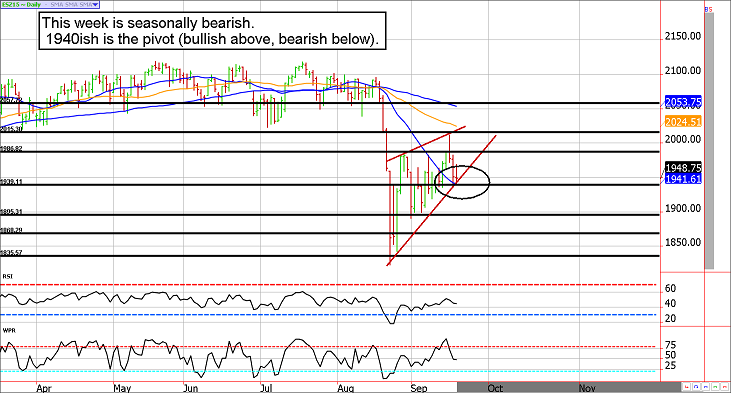 If history has anything to say about it, the ES should be a "sell the rallies" market going into month end.

According to the Stock Trader's Almanac, Monday through Thursday of this week is statistically bearish (meaning there is a 40% or less chance of a positive close). Specifically, on Wednesday, the stats suggest the market has closed positive a mere 28% of the time. Thus, the bears will likely have an edge for the time being.

From a chart perspective; the ES has a major pivot price near 1940. Above this level the bulls have the upper hand, but below it the bears should be in control. It is sure to be a rocky ride, but we believe the odds favor a move below 1940 and perhaps much lower. The mid-to-low-1800s aren't out of the question should the market get a fundamental catalyst.

Nevertheless, if those prices are seen the bulls should be prepared. October is known as the bear killer! Large equity market discounts tend to find sharp and sustainable lows in the month of October.

**e-mini S&P Futures Market Consensus:** We certainly wouldn't be comfortable being bullish here. A break below 1940 might get ugly.