Even the most bearish of the bears couldn't have predicted the bloodbath we've seen in the equity index futures markets since posting a August 18th high. As experienced futures brokers, we've lived through the 2008 financial crisis, the 2010 flash crash, and the August 2011 Federal budget crisis collapse; however, we've never seen a sell off quite like this one.

It is no secret that the U.S. equity markets were in desperate need of a "good" correction. In fact, many very smart (and otherwise successful) traders lost a lot of money attempting to time the down-draft. Nevertheless, it is difficult to rationalize this type of quick repricing in the absence of substantial changes in fundamentals. We certainly agree that the China story is worth monitoring, and will be a drag on the global economy but the truth is the U.S. economy only relies on exporting for 10 to 15% of GDP.

The futures markets are ultimately driven by people, who are driven by emotions. Once the panic and the margin calls work their way out of the system, we suspect the e-mini S&P futures will recover sharply into year end. With that said, bottoms are a process...and they are messy. We'll likely see a retest of yesterday's flushing low, or moderately lower (1800ish), before real buying comes into the ES futures contract.

Have T-Bond Futures topped out? 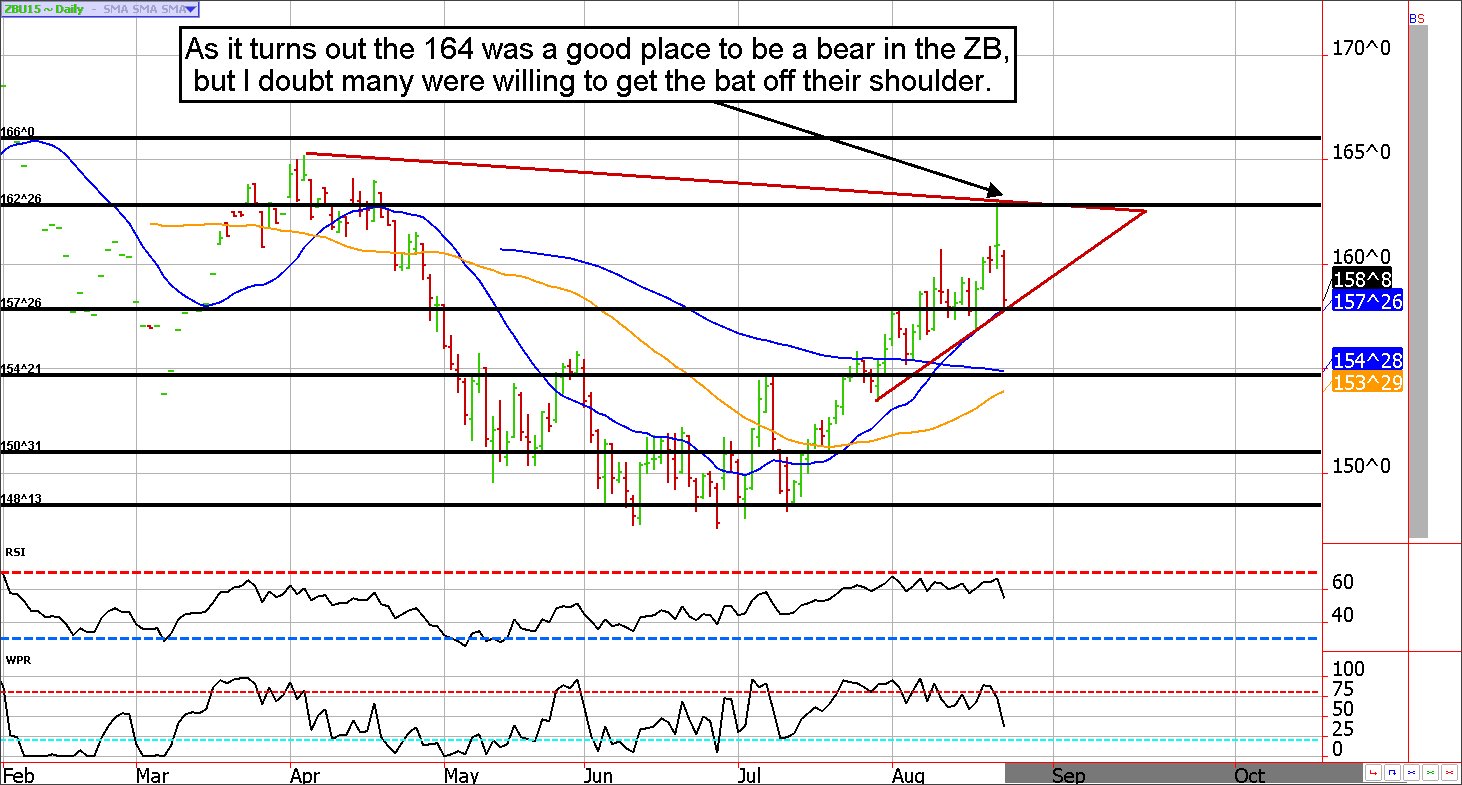 We were dead wrong about the timing and magnitude of the ES futures correction, but our ideas in Treasury futures were pretty accurate. Going into the weekend we had noted that a move toward 164 in the ZB futures, and 130 in the ZN futures, seemed to be in the cards. We also added, the noted levels should offer sharp resistance. Nevertheless, I doubt many people were willing to swing the bat yesterday morning when prices were hovering at reversal levels.

We have a feeling there will be at least one more down-draft in the stock index futures, if we are right about that, Treasury futures probably have another run higher in them. If so, 164 in the T-bond future should be seen on the next trip up.

To be honest, the bond and note futures markets experienced relatively muted volatility in the face of the largest intraday drop in the stock market history. We wonder if there is another round of short squeezing still ahead as this complex plays catch up to the panic trade. The mid-157s in the ZB futures contract will be critical.

**Bond Futures Market Consensus:** We suspect there will be another round of buying. Watch critical resistance in the ZB near 157'15.

The e-mini S&P 500 freefall was contrary to seasonals and option expiration tendencies, but it was overdue

We'll be the first to admit we were wrong about the timing and pace of the correction that is underway in the major U.S. stock indices. Nearly every historical stat we had consulted suggested 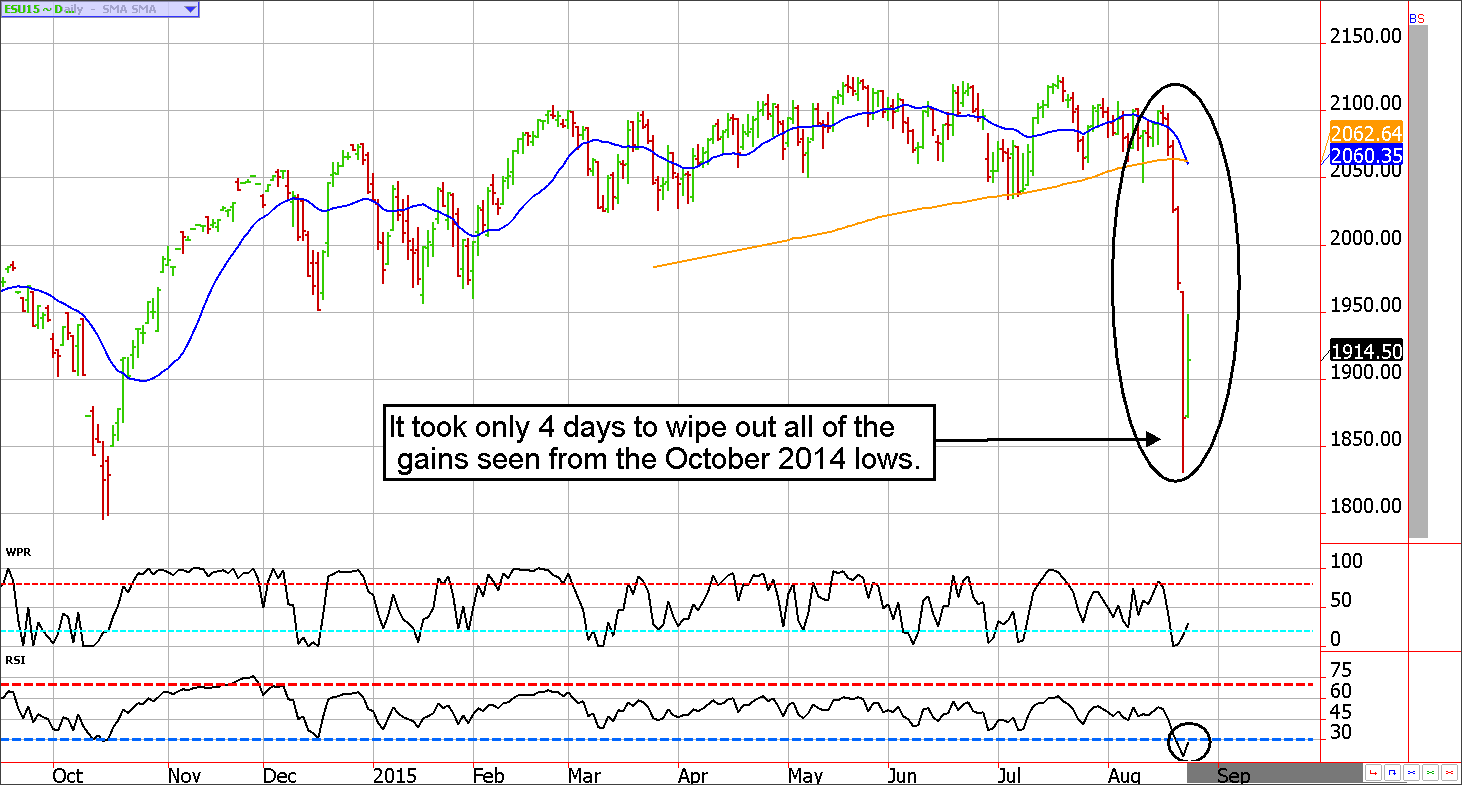 another run at the highs before a bigger correction would be possible. Sometimes, human emotion trumps seasonal patterns and logic. This was one of those times. We'll take this as a lesson learned; when seasonal patterns fail, they do so miserably.

Sometimes stock index futures make a V-recovery and make their way higher from the depths of despair as if it never happened. However, more often futures markets retest the extreme lows before a sustainable reversal occurs. Accordingly, despite today's impressive bounce we have a feeling there is a little more pain for stock market bulls ahead.

Monday's dramatic low was near 1830, but we've noticed the monthly chart of the ES futures is pointing toward a bearish target of about 1800. We have a feeling, that price will be seen before the market firms up for the long run. If we are right, we just hope the ES futures contract gets there in a gentlemanly fashion.

**e-mini S&P Futures Market Consensus:** The ES is dangerous right now (in either direction), so keep trades small. It feels like a retest of 1830, and probably move toward 1800 will be seen before the bulls get footing.