Fed minutes leaked, so did the ES futures contract

Bloomberg "accidently" leaked the minutes of the latest Federal Reserve meeting well over 10 minutes early. Although that might not sound like a big deal for most Americans, it translated into millions of dollars made and lost in the markets in the blink of an eye. Perhaps a timely release might not have experienced such a volatile market reaction.

According to the minutes, most officials believe the stars are not quite aligned for the first rate hike in nearly a decade. The next FOMC meeting is still four weeks away, so there is plenty of room for things to change, but it seems a September rate hike is relatively unlikely. After all, since the minutes were taken, we've seen China's economy fall off the edge of a cliff. Accordingly, U.S. stock indices erased massive gains on the news, but eventually the e-mini S&P futures gave the rally back. 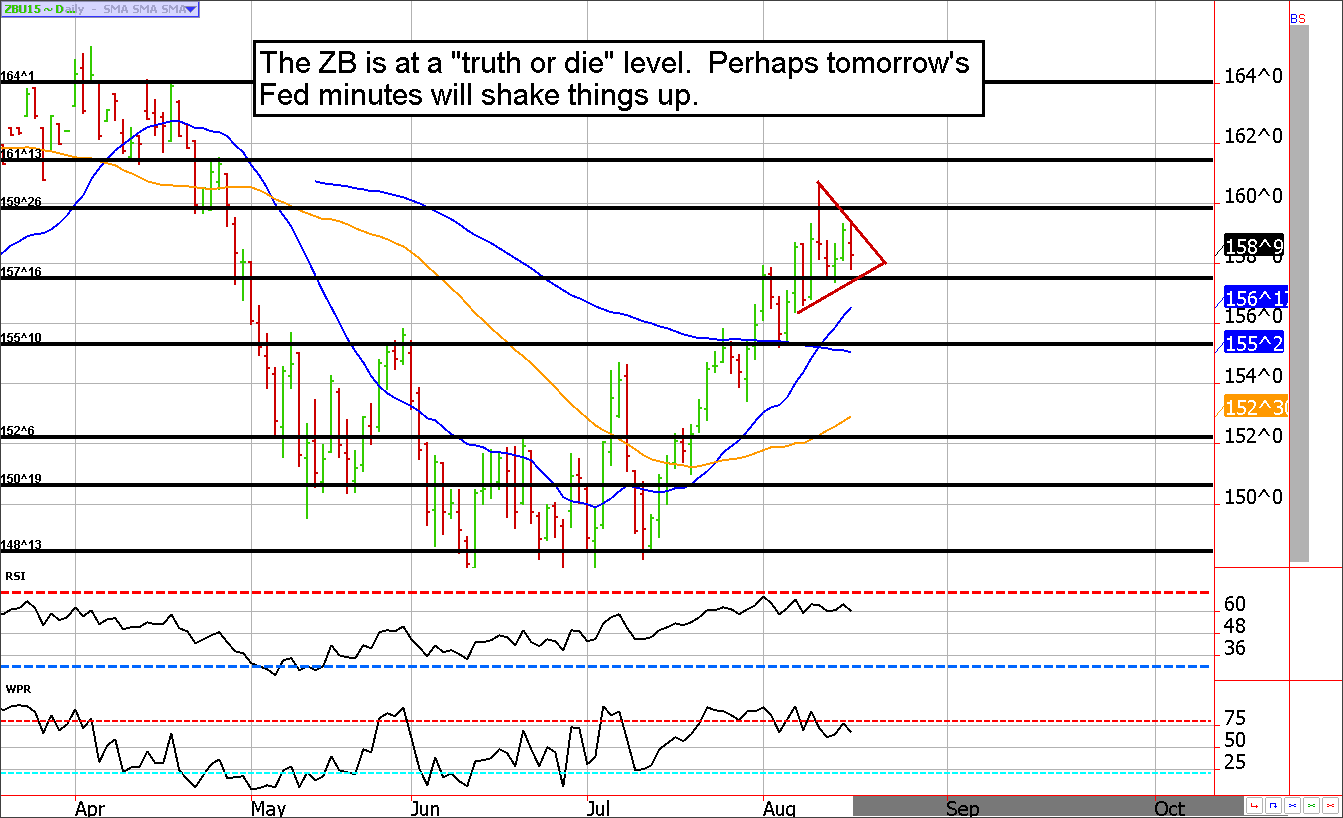 You can't keep Treasury futures down

T-Bond futures started the day under pressure, but it didn't last. Increased volatility in the ES futures market translated into flight to quality buying in the bond pits (ok, they aren't pits anymore but there was certainly plenty of buyers of the ZB futures contract in the electronic market).

We mentioned the possibility of a short squeeze in the Treasury futures complex, and we believe today was the beginning of it. This morning's weakness likely added fuel to the short covering fire because bears were complacently selling T-Bond and T-note futures at prices that eventually became far better buying opportunities than shorts. Sometimes it is the bears themselves that cause the market to rally (because they are the most motivated buyers when prices go against their short positions).

From Friday but worth noting:

We've noticed one of the seasonal services is issuing a buy recommendation in the ZB from now through September 1st. We have a hard time getting bullish from this level, but if you are holding bearish positions you should likely make sure your bet is hedged. 15 of the last 15 years have seen the 30-year bond move higher in the last two weeks of August.

**Bond Futures Market Consensus:** Too many shorts, and strong seasonals are pointing higher.

Will today's dip in the ES futures market be the best "buy" of the summer? 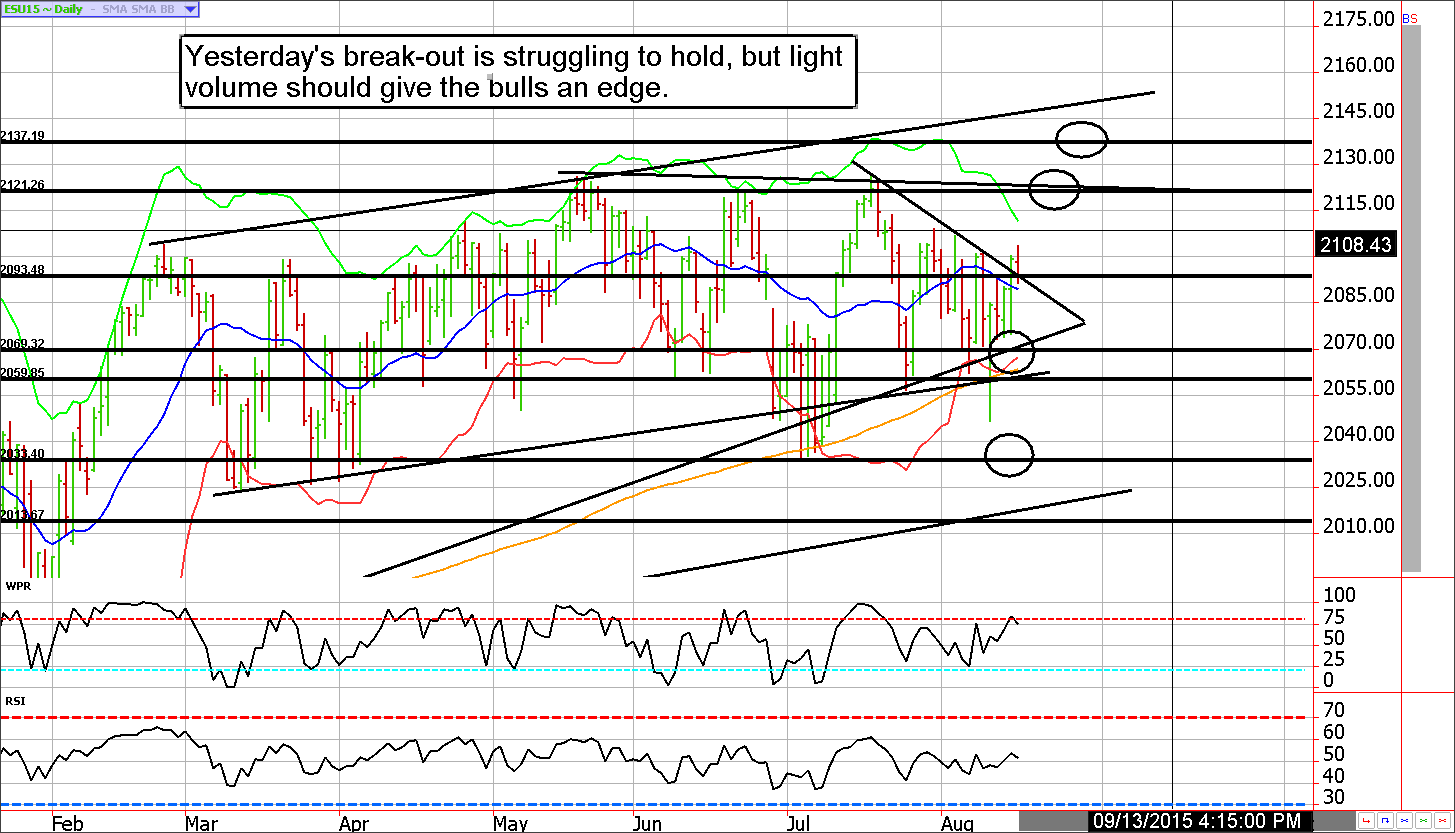 According to historical stats, August 19th has been a great buying opportunity for stock index futures traders; particularly in the e-mini S&P (see details below). Naturally, seasonal pressures aren't the Holy Grail of trading, but it rarely pays to go against them.

According to the chart, 2060 should offer nice support in the ES futures for those bulls willing to put money to work. However, if that level of support breaks, a quick probe to 2033 could be seen, so trade accordingly. Just keep in mind, trading stock index futures isn't an exact science, it is an educated guess.

We've yet to see the 2140 print in the ES the charts have been calling for, but we still think it will likely be seen before any major stock market correction will be possible.

Be aware of a seasonal buy signal issued by MRCI that suggests the ES has a tendency to trade higher from August 19 through September 13th. According to the service, this trade has worked 87% of the time over the previous 15 years. With this in mind, it seems to make sense to be bullish on dips for now.

**e-mini S&P Futures Market Consensus:** We aren't bearish, but we also can't rule out another probing low before the seasonal rally kicks in.

**These are counter-trend day trading entry ideas, the more distant the level the more reliable but the less likely to get filled**