***All rights reserved. Reproduction or distribution of this newsletter without prior consent is strictly prohibited.**

All eyes on the FOMC minutes

The lack of economic news is putting even more attention on tomorrow's FOMC minutes.  The markets will spend the afternoon reacting to the latest in the "taper vs. no taper" debate.  However, in our view...the taper is already accounted for and could soon be forgotten.

On the other hand, an overnight swoon in many foreign stock and bond markets could be pointing to increased anxiety in the U.S. markets.

Although it isn't getting much press, Greece will soon be asking for another bailout and suddenly cash is pouring out of sovereign debt securities.  It will have to go somewhere...and we think Treasuries might be the eventual target but it is up to the Fed to avoid messing things up.

Unfortunately, all traders know (from experience) that the markets constantly seek the outcome that will create the maximum amount of pain to the majority of market participants.  However, once the inflection point is reached in which the bulls simply can't take the squeeze anymore and all of the bears are in with both hands; the trend ends.  Perhaps that is what we saw yesterday.

We realize that a single up day in a sea of red doesn't make for a trend reversal.  However, we've been here before and yesterday's trade felt desperate.  Whether you were looking at futures prices, ETFs, or mutual funds...it was clear that retail investors had enough of the interest rate headlock; liquidation was widespread and massive. Even the bullish of the bulls (us) were feeling defeated...that is what lows are made of folks.  Pain and frustration.

**From yesterday, but we are still of the same opinion:**

The market appears content to price in the beginning of the Fed taper next month.  Yet, the Fed hasn't confirmed such a stance.  Additionally, the Fed has made it clear that any possible tapering will be slightly letting the foot off the brake as opposed to an outright cease in Quantitative Easing. Once again, the market appears to have gotten ahead of itself.  In the meantime, we are wishing we would have waited a few more days to begin nibbling on bullish positions (short puts in the ZB).

We are wondering when the public will begin viewing Treasuries as a value.  We've seen the panicked liquidation, but in their haste we've yet to see the realization that the risk free rate for 10 years is nearing 3%.  This might not sound like much based on historical standards, but this is the best we've seen in years.  It wasn't that long ago that investors were willing to by T-bills at a negative yield to ensure the return OF their capital (without regard to return ON capital).

We aren't giving up on the idea of higher bond prices (and lower yields) yet.  The Fed has worked hard to keep rates low, they might find it worthwhile to "talk their book" in the FOMC minutes released on Wednesday.

**Consensus:** The technical bounce is welcomed, now we need the FOMC minutes to keep the momentum going (and we think we'll get it).  We prefer being bullish on dips! 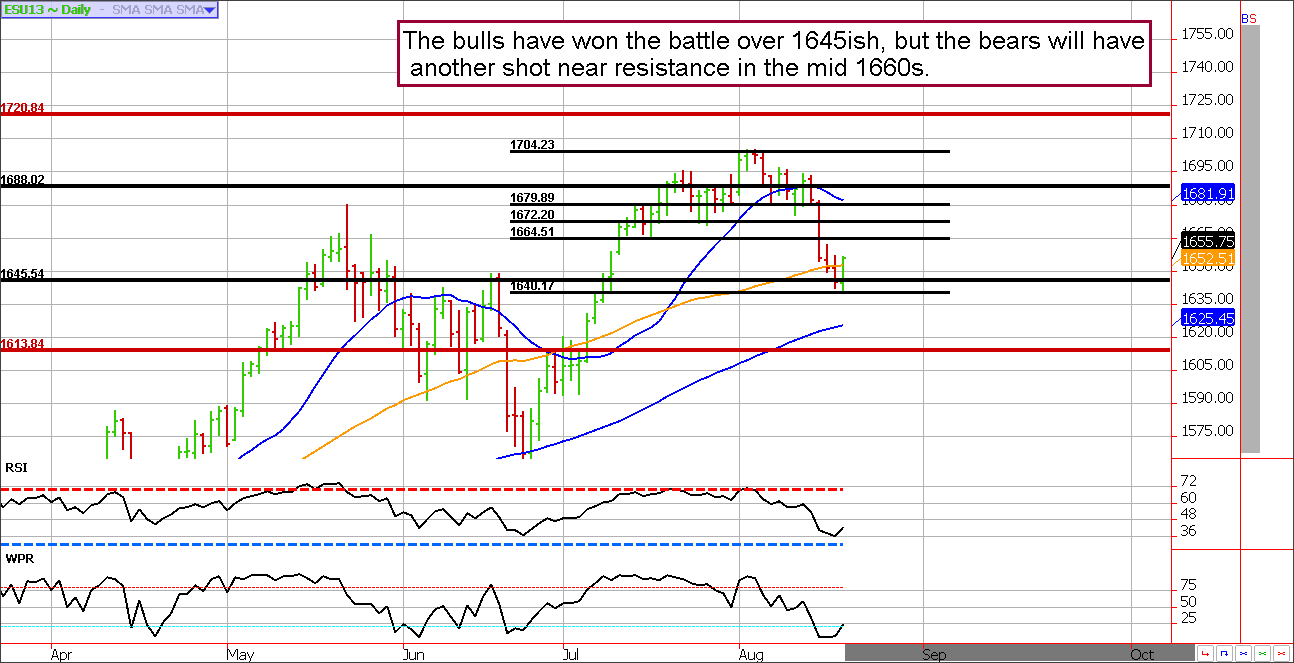 The bulls won the battle, but the bears might win the war

We aren't bullish, but we do think the short squeeze likely has room to run.  Our intra-day models suggest the mid 1660s will offer the first area of "good" resistance.  However, the chart suggests that prices could bounce as high as 1680ish without really negating the down-move.  In other words, now more than ever you want to resist selling prices into a decline.  Look for higher probability entries into strength (remember, the goal is to buy low and sell high).

Despite signs that suggest the buying could extend another day or two; the upswing isn't convincing.  Also, there is a lot of chatter about oversold oscillators and technical indicators.  While this is mathematically true using daily price data, the bigger picture paints a much different story.  On a weekly time frame, the market is nowhere near being oversold and on a monthly chart the market is still overbought!

**From yesterday but still valid:**

The S&P is sitting on the cusp of disaster.  If the mid 1640s hold, we'll likely see another sigh of relief rally but if we break through support (and hold for any meaningful amount of time), things could get ugly fast.

According to the latest COT data from the CFTC, both large and small speculators added to long positions in the ES last week (or at least until the close Tuesday).  We suspect that selling later in the weak suggests significant long liquidation, but both groups were holding net longs in excess of 100,000 contracts.  Consequently, there is still plenty of room for more selling to occur.

We believe that being bearish will be the best paying trade.  Thus, if you want to be a buyer on the dip you should be playing with risk protection.  If (or when) things finally fall apart, the downdraft could be surprisingly harsh.

**Consensus:** 1645ish held (despite a temporary puncture in off hours trading).  There could be more bouncing before selling resumes.

August 13 - Buy back October crude 94 puts near 20 cents to lock in a profit of 50 cents or $500 per contract before commissions and fees.  We'll hold the short calls for now.

DeCarley Trading a Division of Zaner
Twitter:@carleygarner
This email address is being protected from spambots. You need JavaScript enabled to view it.
1-866-790-TRADE(8723)
http://www.decarleytrading.com)
http://www.atradersfirstbookoncommodities.com