A rip your face off rally in Treasury futures?

Government stats revealed that a disappointing 162,000 new jobs were added to the U.S. economy in the month of July.  However, what is more disappointing is the nature of the new jobs created.  According to the stats available to us, of the 953,000 jobs created this year, only 23% of them were full time.  Of course, taking this a step further we concur that 731,000 of the 953,000 new jobs are part time! We are moving in the right direction overall but there is certainly reason to be concerned over the nature of the job growth.

The unemployment rate, which is flawed in that it doesn't account for those who have given up looking for work, ticked lower to 7.4%.  On the surface, this is an optimistic reading but any trader will tell you that each tick lower in the employment rate is a tick closer to Fed tapering.  Eventually, the equity markets might not take this very well. 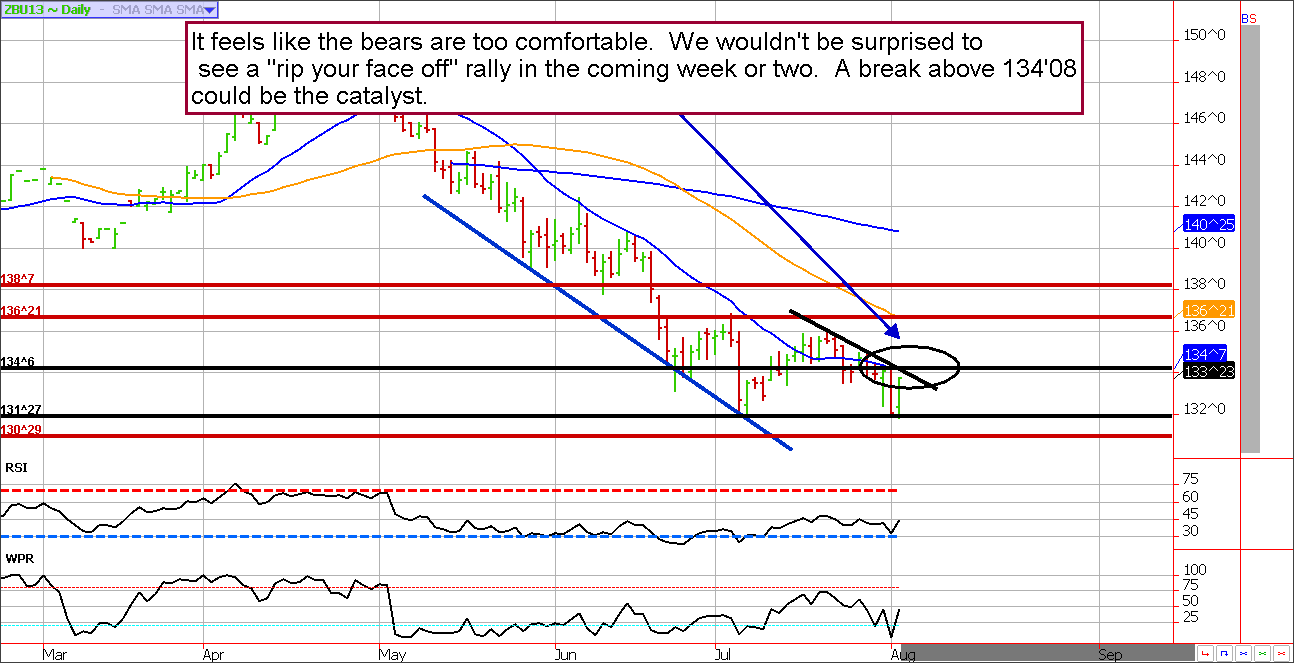 The lows could be in for Treasuries

It is nearly impossible to turn on a business news station or pick up the financial section of the newspaper without being exposed to bearish Treasury security editorials.  The talking heads are clearly leaning toward the cyclical bear market in Treasuries that finally forces interest rates back up to more historically normal levels. However, we see at least three significant factors that could trigger the opposite.

For starters, seasonal tendencies call for higher Treasuries in the coming months. Second, the Fed is still buying interest rates securities at an unprecedented rate. Lastly, the equity market has looked brilliant in recent weeks but it is on fundamentally shaky ground.  It might not take much to knock the stock market bull off its high horse; if so, Treasuries will benefit from a flight to safety.

There are a lot of short speculators with buy stops lining the upside.  If you don't want to be long, don't be short!

**Consensus:** We think the lows could be in.  A break above 134'08 could trigger a massive short squeeze!

June 3: We were early on the first go around, but still like being short bond puts.  Clients who were flat were advised to sell the August 134 or 135 puts for about 29 and 35, respectively.  Some clients added to their July puts with these August puts.

June 5 - We rolled the July 140 puts into August 138 puts for even money to prepare (lower risk exposure) for the employment report.

July 18 - Buy back the September 140 calls near 13 ticks to lock in a profit of about 30 ticks per contract before commissions and fees (equivalent to about $500 depending on your fill prices).

July 31 - Buy back the September 138 calls near 10 ticks to lock in a profit of about $300 per contract before transaction fees (depending on fills).

In the early 1900s, the month of August was the best performer for stocks simply because our agricultural economy was flooded with money going into harvest.  However, now that the U.S. economy is less dependent on farming, August is actually the worst performer for the Dow, S&P 500, and NASDAQ in post 1987 trade.  Further, post-presidential election year Augusts ranks the S&P and NASDAQ 11th out of 12 months and the Dow 12 of 12.

We'll admit this rally has extended further than we had expected but we aren't giving up on the idea of a large correction.  The charts, the stats, and the overly bullish sentiment are all red flags waving.  However, the Fed and QE are putting up a good fight.

If you are playing this market as a bear, be sure to give it some room to breathe.  A possible short squeeze to the 1713ish level is still in play but if seen, this would likely be a good level to get more aggressive. 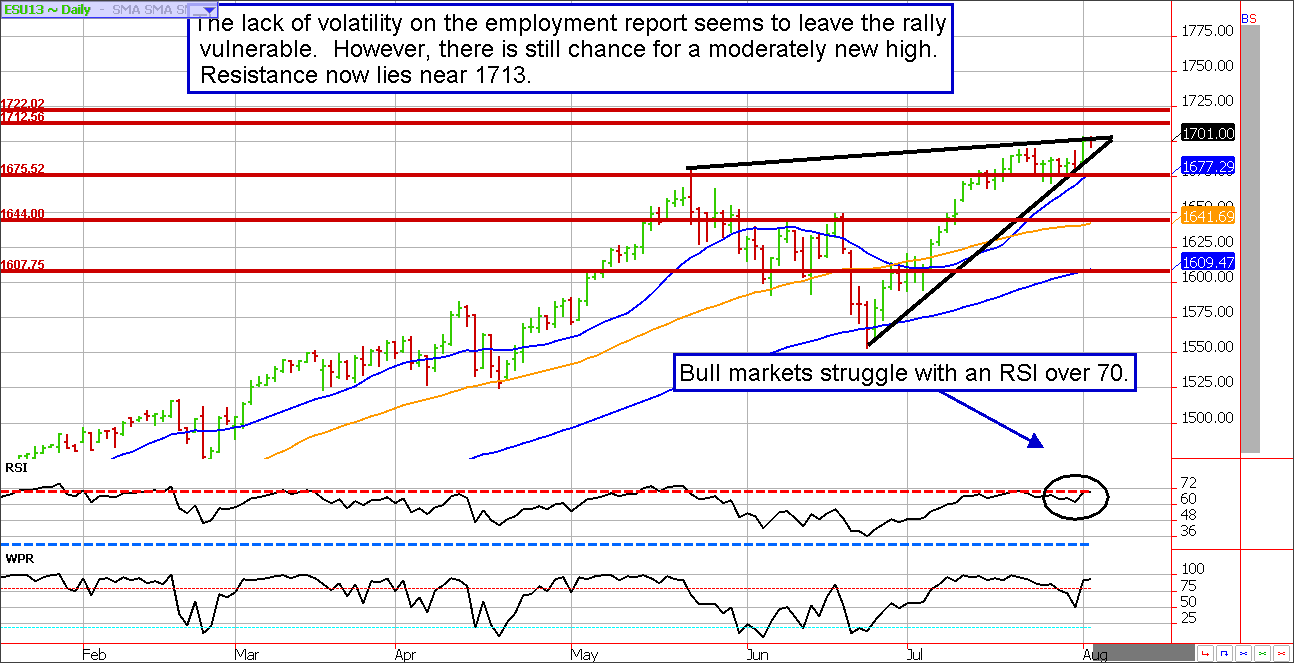 **Consensus:** We like the idea of being bearish on sharp rallies, it feels like this could be a last hurrah rally into the employment report.  We can't rule out a quick probe to 1713ish, but this might be a good place for bears to get aggressive.

June 6 - Sell August Euro 137 calls for about 38 ticks or $475.  These options have nearly quadrupled in value from last week, and we suspect they stand to lose value nearly as quickly if the Euro rally falls short.

July 25 - Exit Euro 133.50 call near break-even (or a small loss for some). We've had a good run in the Euro, if you had followed all adjustment recommendations the total profit would be near $900 per contract before transaction costs. It isn't worth pressing our luck any further.

DeCarley Trading
Twitter:@carleygarner
This email address is being protected from spambots. You need JavaScript enabled to view it.
1-866-790-TRADE(8723)
http://www.decarleytrading.com
http://www.atradersfirstbookoncommodities.com