FOMC was a relative non-event, bottom in Treasury Futures?

An onslaught of news, but not much change in market price

This morning traders were forced to digest a plethora of important data pieces.  The first to hit the airwaves was the ADP private payroll number.  The payroll giant surprised the market with an estimated 200,000 jobs added in the month of July; expectations were calling for a number closer to 175,000.

Soon after, we learned that the second quarter GDP reading has been revised to 1.7%.  This was a tick below the previous release, but most analysis were looking for a figure near 1.1%.  Also adding optimism to the economic recovery, the Chicago PMI index beat analyst estimates to come in at 52.3.

Of course, the main event of the day was the FOMC interest rate decision later in the afternoon.  As expected, the Fed made no change to the interest rate policy.  Not surprisingly, they avoided making any changes to the accompanying commentary.

It was clear that the Fed was set on keeping the peace in the financial markets...mission accomplished.  Treasuries recovered from early morning losses to settle near unchanged and the equity market remained quietly within the current trading range. 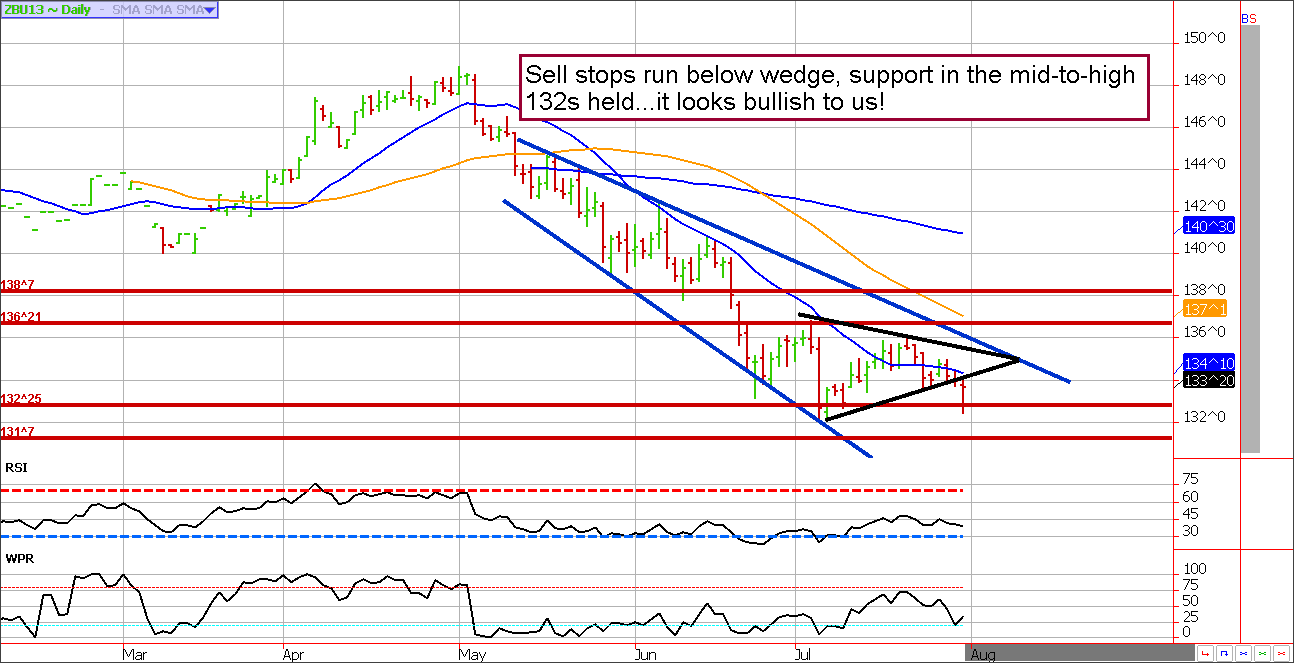 Assuming the employment report doesn't deliver any surprises, it feels like Treasuries are bottoming

Despite what seemed to be bearish news for bonds and notes earlier today, traders were willing to bid up Treasury prices after receiving confirmation that the Fed will continue buying securities to hold interest rates down.  We suspect that we've finally reached the point in which all of the bearish news is out and accounted for, and the path of least resistance will be higher in the Treasury market.

I realize being bullish bonds and notes isn't a popular stance, but sometimes that is precisely when one should be.  As we've mentioned in this newsletter before, Treasuries are seasonally bullish in August.  In fact, over the previous 5 years there has been a distinct pattern of a late July dip, followed by a sharp August rally.

We took this morning's slide as a cue to exit any short bond call positions, but are comfortable holding short puts in this market (details below).

**Consensus:** Unless the jobs number surprises, the lows could be in.  We prefer a "buy on dip" mindset.

June 3: We were early on the first go around, but still like being short bond puts.  Clients who were flat were advised to sell the August 134 or 135 puts for about 29 and 35, respectively.  Some clients added to their July puts with these August puts.

June 5 - We rolled the July 140 puts into August 138 puts for even money to prepare (lower risk exposure) for the employment report.

July 18 - Buy back the September 140 calls near 13 ticks to lock in a profit of about 30 ticks per contract before commissions and fees (equivalent to about $500 depending on your fill prices).

July 31 - Buy back the September 138 calls near 10 ticks to lock in a profit of about $300 per contract before transaction fees (depending on fills). 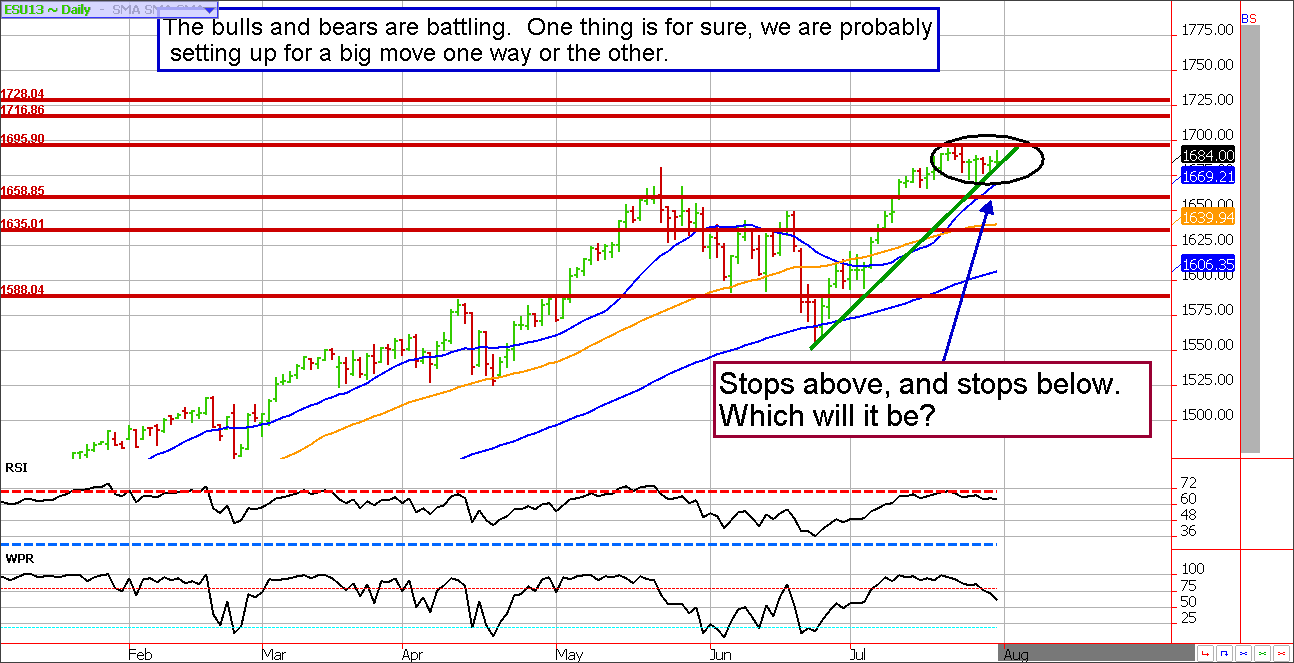 Stop loss orders are accumulating quickly on both sides of the market.  The difference between a continuation of the rally and an outright reversal could be as simple as prices slipping above resistance or below support and triggering stops.

We are fundamentally bearish, but we wouldn't be surprised to see the buy stops run going into, or immediately following Friday's employment report.  This might be the last gasp of a tiring rally (and just enough to sucker in the last of the bulls) before prices roll over.

Unfortunately, the sheer magnitude of the buy stops up above could mean prices as high as 1716.  We'd rather not see it, but should it happen this would be a price for bears to consider getting more aggressive.

We are sticking with the same overall idea:

The S&P is pinned, the volume is light and we have plenty of event risk on the horizon.  There is absolutely no reason to be aggressively long or short this market.  Although we believe this rally will eventually fail, the chart leaves plenty of room for volatility on both sides of the trade.

**Consensus:** We like the idea of being bearish on sharp rallies, it feels like we could see a last hurrah rally into the employment report that could provide better (higher) prices.

June 6 - Sell August Euro 137 calls for about 38 ticks or $475.  These options have nearly quadrupled in value from last week, and we suspect they stand to lose value nearly as quickly if the Euro rally falls short.

July 25 - Exit Euro 133.50 call near break-even (or a small loss for some). We've had a good run in the Euro, if you had followed all adjustment recommendations the total profit would be near $900 per contract before transaction costs. It isn't worth pressing our luck any further.

DeCarley Trading
Twitter:@carleygarner
This email address is being protected from spambots. You need JavaScript enabled to view it.
1-866-790-TRADE(8723)
http://www.decarleytrading.com
http://www.atradersfirstbookoncommodities.com