Will King Dollar break the S&P?

We keep asking ourselves who is buying into a market at an all time high; the answer is always the same.  It is scared money; the bears are likely playing a bigger part in this rally than the bulls are.

Remember, prices changes are largely based on motivation not necessarily the quantity of buyers and sellers. Traders jump on the bearish bandwagon on every little pullback in the S&P, but they've been burned so badly this year that they aren't willing to risk much. As the market starts to creep higher, they panic and buy back positions without regard to price (in other words, the bears become highly motivated buyers bidding prices up).

On the other hand, because this is one of the most "hated" rallies of all time; money managers are scrambling to get sidelined cash into the market.  These traders are panicking to get in the market and are willing to buy shares at lofty prices because they feel like they can't afford to wait for the dip that never seems to come.

We don't know how long this frenzy will last, but we do know that scared money rallies and performance chasing rarely ends well. 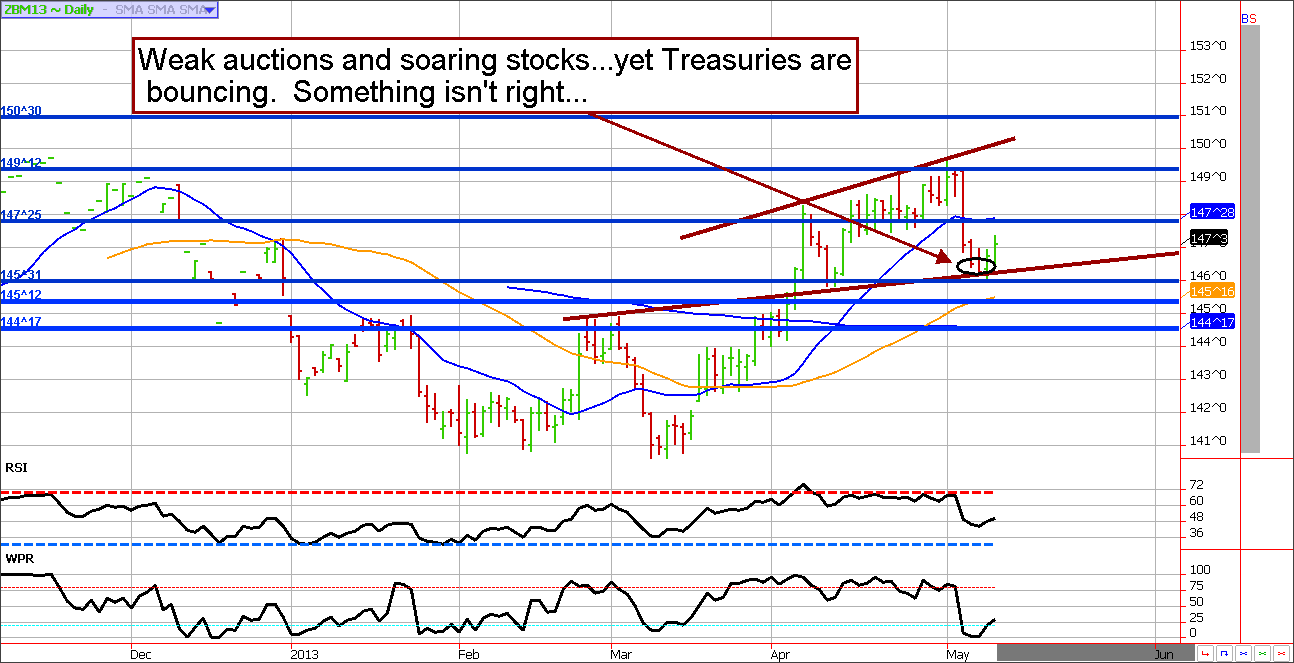 This weeks 3-year and 10-year note auctions were less than impressive, but today's 30-year bond auction picked up the slack.  Today's auction drew a 2.53 bid to cover which is just under the 12 auction average.  The rate was 2.98% and drew decent demand from indirect bidders (believed to be foreign investors).

Apparently the demand was more than enough to absorb the new  supply and hold prices at historically lofty levels.  Coming into the week we felt like the odds favored a flush out in this complex that would have brought the 30 year (at minimum) to the mid to low 145s; in light of the unbelievable equity rally we are shocked that it didn't materialize.

This is just another glaring reminder that there is something amiss in the financial markets.  The hard and fast trading rules of the past have simply been tossed to the side.  It is imperative that traders avoid taking excessive risks, or marrying a position.  The key to surviving irrational markets is to trade less and be nimble.

**Consensus:** We'd rather be a buyer on large dips in this market.  Trade is breaking the conventional rules, so we recommend being patient.  The mid 145's in the ZB could be on tap.

April 4: Sell a June 5-year note futures contract near 124'14 and buy a June 124.5 call for about 19 ticks to limit the risk on the trade to about $300 to $350 depending on fill prices.  This trad has little, to no, margin and offers theoretically unlimited profit potential.

We could actually hear the cries and feel the heart-break of the bears as the ES slowly ground into the low 1630s in afternoon trade.  However, after reaching a high of 1632.25 (a resistance level defined by several technical schools of thought and noted in this newsletter), the market quickly retreated.  The ES simply ran out of buyers, and blocks of sell stop orders were quickly triggered.

Is this THE top? It is impossible to know until after the fact, but I'll tell you what...the sudden collapse in the currency market, followed by rare selling the the S&P, certainly feels like the making of a top.  With that said, topping out is a process; it isn't a moment.  If you are a bear, don't chase prices lower...look to establish positions on sharp rallies and be prepared to take profits on the dips.  Don't marry your trade!

From Wednesday's newsletter but still valid:

They say the trend is your friend until it ends.  Well, this market has certainly been friendly to the bulls.  In fact, complacency is running rampant among bulls and the bears are starting to "cry uncle".

According to our sources on the trading floor of the CME, it seems as though most of the buy stops have been elected (meaning most of the shorts are squeezed out).  They also noted lingering sell stops lining the downside of the market.  This doesn't guarantee the market will pull-back but it increases the likelihood.

All corrections start with a little profit taking, continue with running of the sell stops, and then ends with panicked selling.  We aren't sure if we will get it, or when, but any slightly bearish catalyst could send the snowball rolling down the hill.

With that said, this market is not behaving like anything we've ever seen before.  If you are playing the downside, be sure you are leaving plenty of room for error.  Our models suggest the highs should be in or near, but others are looking for prices into the 1630s and even 1650s before all is said and done. 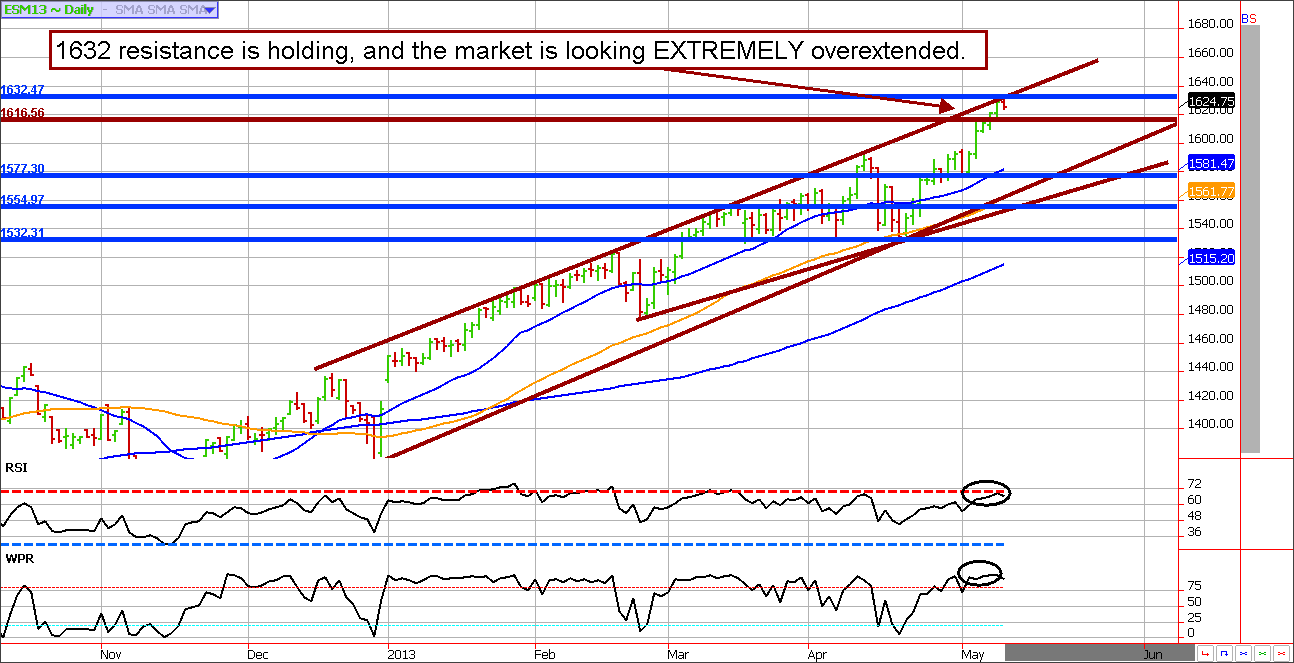 **Consensus:** We'll admit that we didn't see 1630s as a probable outcome.  Nonetheless, it feels like scared money chasing prices. We are cautiously bearish.

April 15 - Buy back 68.50 put back at a loss of a little over $1,000 (not including profit on call), roll into the July $97/81 strangle.  This adjustment will potentially recoup premium lost on the June puts and turn a nice profit if volatility dies.  It also slows down the trade and spreads the risk

April 26 - Buy back July 81 put and sell the July 86 put to re-balance the strangle.  The resulting trade is a short 97 call and a short 86 put; this trade is has a moderately bearish bias.

DeCarley Trading
Twitter:@carleygarner
This email address is being protected from spambots. You need JavaScript enabled to view it.
1-866-790-TRADE(8723)
www.DeCarleyTrading.com
www.ATradersFirstBookonCommodities.com
www.CurrencyTradingtheBook.com