Capitulation? Probably, but that doesn't mean the squeeze is over

Capitulation?  Probably, but that doesn't mean the squeeze is over

The market "liked" this morning's economic news, but what seems to be gangbusters data on the surface isn't as promising after taking a better look at the details. Nonetheless, markets move on emotion and perception.

Initial claims fell to a shocking 335,000 from last week's revised 371,000 and expectations of about 370,000. However, we're hearing that seasonality is likely the explanation. Similarly, Michigan sentiment exceeded estimates of consumer confidence but many analysts believe the ultimate vote of confidence is made with a wallet...and we've yet to really see consumers put their money where their mouth is.

We aren't pessimists; in fact, we tend to be optimists. However, it feels like the markets have gotten a little ahead of themselves. Although it is coming late, we still believe there will be a customary "January break" in regard to economic data and risk assets. 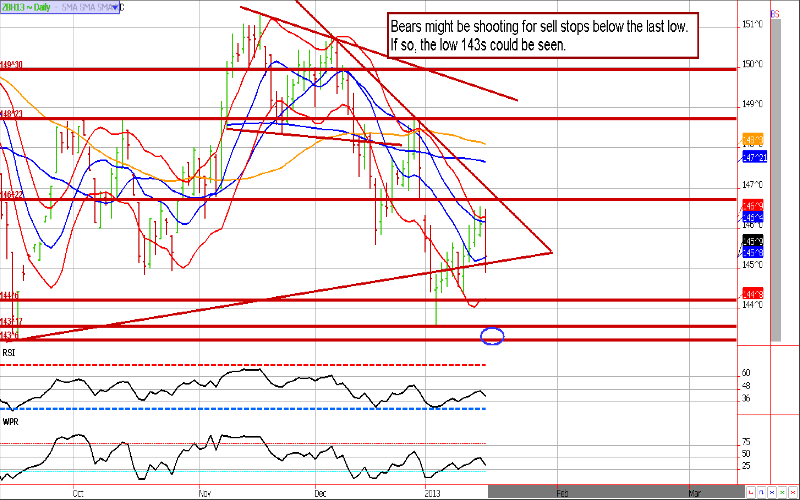 Treasury rally fails, a retest of the lows looks likely

Although we were hoping for higher prices in this complex, we knew a few days ago when the ZB struggled to reach our initial upside target of 146'20 that this market was weak. One day typically isn't enough to kill a market, but this time it feels like it is.

As always, Friday's are tricky due to position squaring; also, the chronic light volume makes for difficult speculation. We'll be on the lookout for some type of falling out in the market but probably won't consider being bullish until the March 30 year prints in the mid to low 143s.

December 18: Buy the March 5-year note futures contract near 124'05 and purchase a 124 put for insurance for about 16 ticks ($250). The maximum risk on this trade is about $400, but the profit potential is theoretically unlimited. 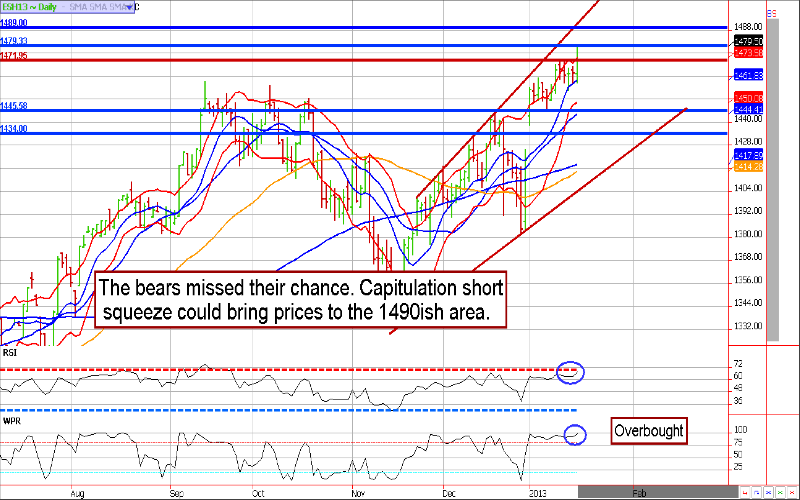 There are a lot of very smart traders wondering how the equity markets are managing to move higher. We certainly didn't want to see this, and were mildly betting against it...but we aren't shocked either. In the last newsletters we mentioned that light volume has a tendency to be supportive for prices in the stock indices. We also mentioned that Friday's option expiration was likely holding the market hostage as traders are being forced to buy futures (and stocks) to cover short call option positions that have gone "bad". Last but not least, last year's massive rally left many retail and professional investors on the sidelines. It feels as though they've finally had enough of missing out and are now rushing to get in. This panic is not unlike the rush of liquidation seen in a bear market; in both instances they often end the same fashion, a swift reversal. Unfortunately, it is difficult to gauge when and where the turning point will be. According to our chart work, 1480 (seen today) is a possible reversal point and the next will be about 1489.  We'd rather not see 1489, but it appears that is what it might take to work the capitulation buying out of the market. With that said, once expiration is out of the way it might be difficult for the market to sustain such lofty pricing.

These are counter-trend entry ideas, the more distant the level the more reliable but the less likely to get filled

Carley Garner
DeCarleyTrading.com
Futures, Options, Integrity
Browse Carley Garner's Trading Education Books
Local: 702-947-0701
Toll Free: 1-866-790-TRADE (8723)
There is substantial risk in trading options and futures. Doing so may not be suitable for everyone. These recommendations are a solicitation for entering into derivatives transactions. All known news and events have already been factored into the price of the underlying derivatives discussed. From time to time persons affiliated with Zaner, or its associated companies, may have positions in recommended and other derivatives.Past performance is not indicative of future results.  The information and data in this report were obtained from sources considered reliable.  Their accuracy or completeness is not guaranteed and the giving of the same is not to be deemed as an offer or solicitation on our part with respect to the sale or purchase of any securities or commodities.  Website administrators, affiliated brokers, employees etc. may in the normal course of business have positions, which may or may not agree with the opinions expressed in this report.  Any decision to purchase or sell as a result of the opinions expressed in this report will be the full responsibility of the person authorizing such transaction.
FREE Newsletter Trial