Currencies will likely control in the near term

Currencies will likely control in the near term

Aside from the so-called "fiscal cliff"; there will be another outside force influencing the prices of Treasuries and stock index futures: currencies. This is generally always the case, but we feel like it might play a larger than expected role in the coming weeks. Historically, the S&P 500 has had a tendency to move in tandem with the Euro (or opposite the U.S. dollar); similarly, Treasuries often move in lockstep with the greenback (or opposite the Euro). We doubt the currency markets have climaxed, but we'll be watching for signs of such to guide speculation in the ES and ZB.

In the case of currencies, and other financial markets for that matter...we've noticed the trading volume has already dropped to discounted levels. Unfortunately, this will be the case through the first week of January. It isn't uncommon to see the managers of large funds give the reigns to their protégés and this environment often leads to overzealous moves followed by sharp mean reversion. In "English", this means traders might benefit from patiently waiting for statistically extreme pricing before implementing counter-trends trades. For instance, in the Euro an irrational run into the 1.33 area might be an attractive place to be a bear. Likewise, the DX in the 79 area could be a place for the bulls to begin nibbling. Naturally, traders might look at these currency levels to speculate in related markets (Treasuries and stock index futures).

Dollar looking lower, and could drag Treasuries down with it

You should be trading the March contract!!!

Thus far, seasonal weakness in the bond and note market has been underwhelming. Additionally, the recent sell-off failed to hold below critical support levels after trading through them. Because the chart is mixed, at best, we have to look elsewhere for clues.

In our opinion, the dollar index appears to be in the process of retesting the summer lows. If we are right about this, it should give the Treasury bears an edge.

We've also noticed that the latest COT Report issued by the CFTC suggests that large speculators are nicely long the complex (particularly the 10-year notes). This leaves trade vulnerable to further liquidation.

November 12: Sell the March 5-year note futures contract near 124'17 and buy a January 124.75 call for about 10 ticks ($150). The call insures the trade absolutely above 124'23, to create a trade with unlimited profit potential on the futures contract and risk limited (compliments of the long call) to about $350 before transaction costs. We are hoping for a move to the 124 area. 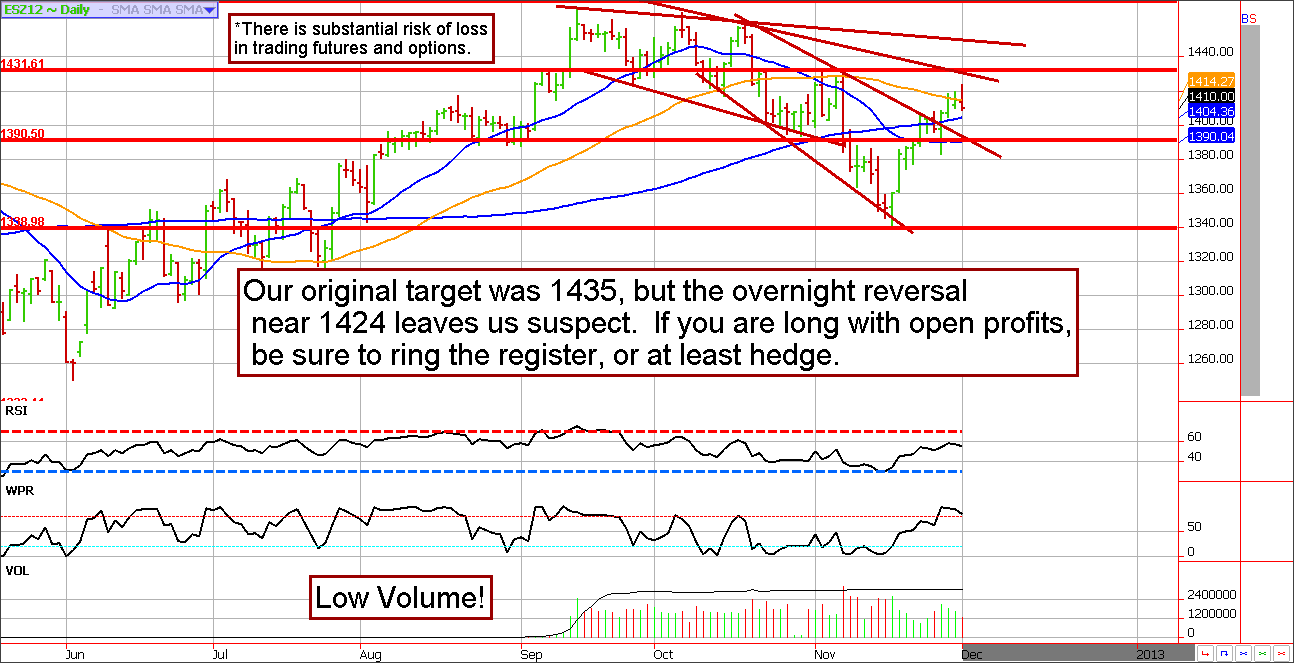 Last week we were spoiled by positive economic data, but this week isn't starting out as promising. Today's ISM index was reported to be 49.5, down from 51.7 in the prior month. Don't forget, a reading under 50 is considered contractionary.

We were hoping the rally would extend into the mid-1430's on this leg but today's price action is leaving us with some doubt. Prices reversed sharply from 1424; in the overall scheme of things this isn't too far from our original target. Accordingly, we might be due for some digestion in the short-term. If you are a bull sitting on profits, you want to go into defense mode.

These are counter-trend entry ideas, the more distant the level the more reliable but the less likely to get filled

DeCarley Trading
Twitter:@carleygarner
This email address is being protected from spambots. You need JavaScript enabled to view it.
1-866-790-TRADE(8723)
www.DeCarleyTrading.com
www.CurrencyTradingtheBook.com

There is substantial risk of loss in trading futures and options.